An indefinite truce between the government in Bogota and Colombia's largest rebel group has gone into effect. It comes after the Colombian government and FARC agreed on a historic peace agreement last week. 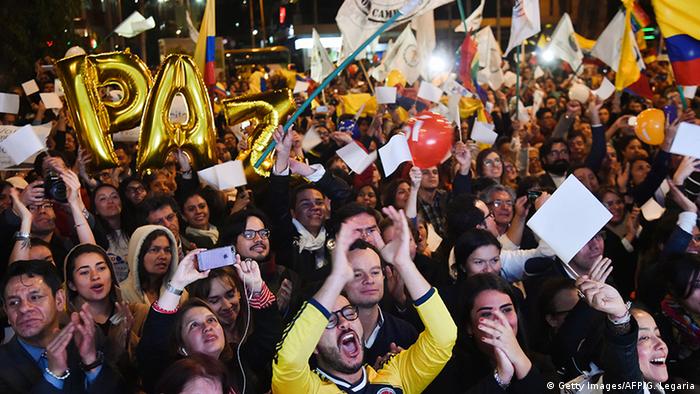 The permanent and definitive ceasefire went into effect at 12:01 a.m. Monday (0500 UTC) and ended a 52-year-old war between the Colombian state and Revolutionary Armed Forces of Colombia (FARC), after the two sides agreed last week on a historic peace agreement.

"Never again will parents be burying their sons and daughters killed in the war," said Londono, who is also known as Timochenko. "All rivalries and grudges will remain in the past." 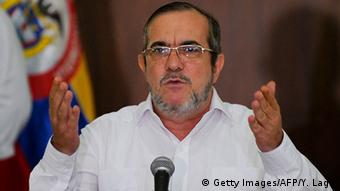 "This means nothing more and nothing less than the end of the FARC as an armed group," Santos said, adding that the final peace deal would be signed in Colombia. "The children and youth of our country have never known a single day without the violence of the conflict. Neither have the adults."

FARC declared a unilateral ceasefire in July 2015. But Monday's ceasefire is the first time both sides of the conflict have pledged to permanently end fighting that has claimed more than 250,000 lives and displaced millions of people.

The fighting over ideology, territory and political differences involves FARC, the military and right-wing paramilitary forces.

The FARC and the government are expected to sign the peace accord between September 20 and 26. Then Colombians will vote on the peace agreement in a referendum on October 2. As many as 34 million people are eligible to cast ballots.

The peace agreement envisions some 7,500 FARC guerillas going to collection points to lay down their arms under UN supervision within six months. Before the demobilization, FARC leaders, including the 29-member central committee, will convene one last time from September 13-19. It will then become "a legal political movement," it said in a statement on Saturday.

Under the peace accord, FARC's yet-to-be-named political movement will be guaranteed five seats in both the lower house and senate. Another 16 seats will be reserved for activists in rural areas neglected by the state. Existing political parties will be banned from these areas.

Both arrangements will last until 2026, at which point FARC's political movement will have to prove its political strength through the ballot box.

Other parts of the accord deal with rural reform, combating drug trafficking, compensation to victims and transitional justice.

The deal does not include a smaller leftist group, the National Liberation Army (ELN). In March, Colombia announced it would hold peace talks with the ELN, but the rebels have failed to meet preconditions to release all hostages and cease kidnappings.

The UN has prepared a far-reaching mission employing hundreds of observers to verify an end to the fifty-year conflict between the government and FARC rebels. The deal is set to be tested by a referendum in October. (27.08.2016)

The Colombian government has reached a historic truce with the armed rebel group. An insurgency has been ongoing in the country for decades, leaving hundreds of thousands of people dead. (24.08.2016)

Colombia and leftist ELN rebels have announced formal peace talks, in a move that could end a five-decade conflict. The government is also making progress in talks with FARC, the largest rebel movement. (30.03.2016)

Members of an obscure rebel group have killed eight soldiers in Paraguay just days after leftist guerrillas and Colombia reached an historic peace deal. The government has vowed to stamp out 'terrorists.' (28.08.2016)