Madagascar's new president has taken office. Hery Rajaonarimampianina’s inauguration was marred by an explosion afterward that killed one person and wounded dozens after the ceremony. 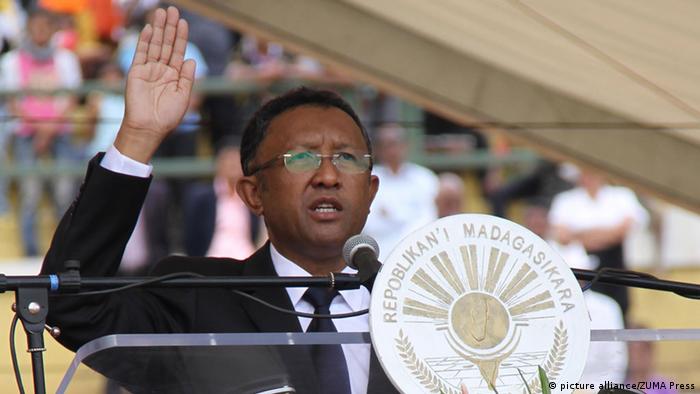 The government announced that initial investigations showed that a hand grenade had caused the blast near the Mahamasina stadium in the capital, Antananarivo, hours after the inauguration there. Internal Security Minister Arsene Rakotondrazaka said the attack killed a 2-year-old child and wounded 33 people, seven of them critically.

"The new president had just been sworn in," Rakotondrazaka said at the scene. "We know the political situation. His inauguration may not have pleased everyone. That's perhaps one of the reasons why this happened."

Rajaonarimampianina, Madagascar's former finance minister, won the presidential election on December 20, the first since the 2009 coup that plunged Madagascar into a political crisis that has sharply slowed economic growth and deepened poverty. Jean Louis Robinson, whom Rajaonarimampianina narrowly defeated, pledged on Saturday to organize and unite the island state's fractured opposition.

Robinson, who conceded defeat on Friday and attended Saturday's swearing-in, told reporters that "this time, the opposition will be able to advise the state" instead of "always opposing, disrupting and marching on the streets."

The country's former strongman and the leader of the 2009 coup, Andry Rajoelina, had backed Rajaonarimampianina in the election. In his speech, the new president, an accountant educated in Canada, did not mention political rivals like Robinson by name when calling for the country to come together.

"I ask you, my political family and friends, help me to promote the great destiny of national unity," Rajaonarimampianina said. "I want you to understand that it is not about us but about Madagascar, our collective future and our place."