Experts Say Merkel Will Bring Change in Style, Not Policy for US | Germany | News and in-depth reporting from Berlin and beyond | DW | 12.11.2005

Germany finally has a coalition deal, paving the way for Angela Merkel to become chancellor. Experts say foreign policy under her will lead to warmer ties with the US, but it won't translate into major policy changes. 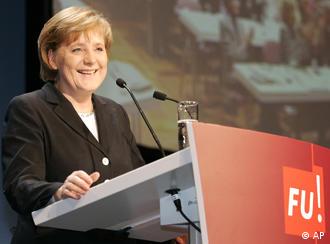 Merkel's always favored close relations with the US

Germany's conservatives led by Angela Merkel and the Social Democrats agreed on the second so-called "grand coalition" in Germany's postwar history on Friday.

The move paves the way for 51-year-old Angela Merkel, a former scientist who grew up in the communist former East Germany, to become Germany's first female chancellor. She is expected to be sworn in later this month provided separate party conferences on Monday endorse the coalition deal. 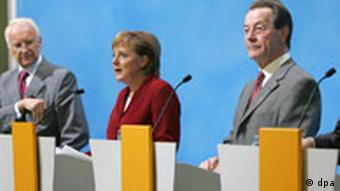 On Friday, Merkel was optimistic that the new grand coalition would work for Germany. "I think that this can be a coalition of new possibilities," Merkel said, adding it offered Germany "a real chance" to pull itself out of its ongoing economic crisis.

"Change in style and rhetoric"

Analysts however aren't expecting significant change on the foreign policy front. They do however admit that German relations with the US will be become warmer given that Merkel's conservatives are overwhelmingly in favor of closer transatlantic ties and repairing the damage inflicted upon it by Chancellor Schröder's government. 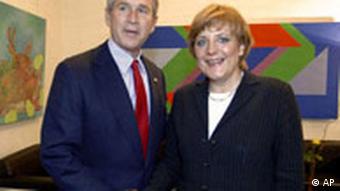 Bush, left, and Merkel in Mainz in Germany

"I think the big change you're going see is one in style and rhetoric," Karen Donfried, senior director of the German Marshall Fund in Washington.

Reform drive crucial for better ties with US

Jackson James, executive director of the American Institute for Contemporary German Studies, said transatlantic relations under the new government hinge on whether Merkel can make headway on the domestic front with critical economic reforms.

"The success of Germany's reforms will have important implications for Europe and the United States," James told a congressional hearing this week on the German elections and their implications for US-German ties.

"The ability of Germany to meet its foreign policy responsibilities in terms of defense allocations, its presence in regional hot spots like the Balkans and the Middle East, and its role in the international financial institutions will depend on achieving a sustainable level of economic growth."

Analysts, however, noted that though Merkel is opposed to Turkey joining the European Union, there was no indication that she would stand in the way of the 10 to 15 year negotiating process, by which time she is not expected to still be chancellor. 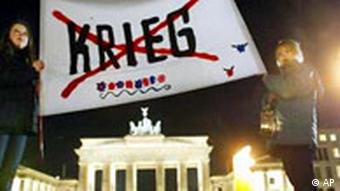 They added that however much Merkel may wish to improve ties with Washington, one inescapable constraint will be German public opinion, which is fiercely opposed to the Bush administration and its international policies.

"Given the unambiguous, negative view among the German public of US foreign policy and the Merkel government's need to have domestic backing for its economic and social reforms, it is difficult to see the new chancellor blazing new foreign policy paths together with Washington," Donfried, who also testified this week before the Committee on International Relations in the US House of Representatives, said.

"If Merkel closes the gap between the rhetoric and the policy, I think it would restore some of the trust between Berlin and Washington and that then probably might lead over into public opinion," she added.

Incoming chancellor Angela Merkel called Saturday for Germans to make sacrifices to help put their struggling economy back on track, but her future government's policies are already under fire. (Nov. 12, 2005)