Exhibition Hall Collapses in Poland | Europe | News and current affairs from around the continent | DW | 29.01.2006

Rescuers have pulled several dozen bodies from under the collapsed roof of an exhibition hall in Poland. The death toll is expected to rise as hopes fade of finding survivors in the rubble. 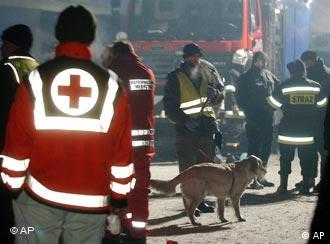 Rescue workers stand outside the exhibition hall in Katowice.

Rescue teams searched in bitter cold Sunday for victims buried when the roof of an exhibition hall in the southern Polish town of Katowice collapsed during an international gathering of pigeon enthusiasts, killing at least 65 people and injuring 160.

The death toll continued to rise steadily through Sunday as emergency crews battling extreme cold used floodlights and hand tools to dig through the snow and debris of the building. The modern exhibition hall, which caved in apparently under the weight of snow around 5:30 pm (1630 GMT) Saturday afternoon, is roughly the size of a soccer field and was thought to have held at least 700 people

A spokesman for the provincial governor confirmed that so far 65 people had died and fire brigade officials were saying several dozen could still be under the rubble. Dog rescue teams have begun combing the site for survivors.

"We haven't managed to find anyone alive yet," Lukasz Kusion, a dog rescue team member told TVN24 television. "With every minute, chances are getting slimmer because of low temperatures," he told the Polish broadcaster. 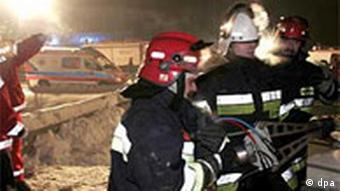 Emergency services work through the night

Nearly 1,000 police, firefighters and soldiers are involved in the rescue operation and workers from local mines were called in to help sift through the rubble. After initially only relying on hand tools, heavy cutting equipment and thermal gear were brought in on Sunday.

It is the largest rescue operation in recent Polish history.

"A catastrophe on this scale has never happened in Poland," said Andrzej Urbanski, a senior aide to President Lech Kaczynski.

A national day of mourning was called on Sunday as Polish Prime Minister Kazimierz Marcinkiewicz joined several thousand others in Katowice's Cathedral of Christ the King for a special mass for the victims.

The exhibition of racing pigeons, one of the largest in Europe, attracted participants from Belgium, the Netherlands, Germany and Ukraine, according to the event's Web site. Visitors at the fair told reporters a thousand people had attended the event.

Early reports from hospitals indicate Belgians, Dutch and Germans could be among the victims.

What caused the collapse?

Although it is still too early to say for certain, the fire brigade and police on the scene said the weight of snow on the metal roof had caused the roof to collapse. However, the building's manager told Polish television that snow had been regularly cleared from the roof. 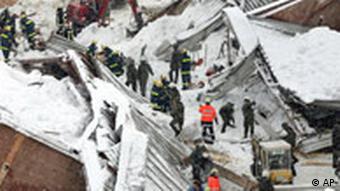 Poland is experiencing its coldest winter in several decades and like in other parts of central Europe, temperatures have fallen to as low as minus 30 Celsius. Over the past week, the region has been hit with heavy snowfalls.

Earlier this month, 15 people were killed at an ice rink in southern Germany when a roof collapsed under the weight of heavy weight snow. Only a few days later, the roof of a supermarket in the Czech Republic caved in under the snow, injuring one woman.

The local prosecutor in the German town of Bad Reichenhall has begun investigating the cause behind the collapse of an ice rink. (Jan. 4, 2006)