EU′s Barroso Encouraged by Tibet Talks with China | Europe | News and current affairs from around the continent | DW | 25.04.2008

European Commission President Jose Manuel Barroso said that he was encouraged by talks with Chinese Premier Wen Jiabao on Tibet in Beijing as news broke of possible dialogue between China and the Dalai Lama. 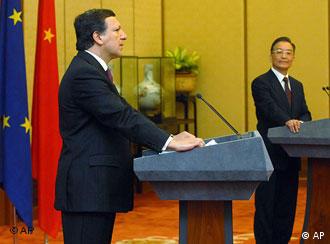 "I am particularly encouraged by our open and frank exchanges on Tibet," said Barroso after meeting with Wen. "I hope to see positive developments soon. I have reiterated the EU position on this matter."

Barroso, leading a large EU delegation to the Chinese capital amid tension over China's rule in Tibet and the Beijing Olympics, said he reassured Wen that Europe considered the Himalayan region as part of Chinese territory. He said Europe supported China's territorial integrity and unity "and that naturally applies to Tibet."

However, he did urge China to reverse its current policy and grant free access for foreign journalists and foreign visitors to Tibet.

Barroso traveled to Beijing with nine European Union commissioners to address a range of topics from climate protection, trade and market issues to energy cooperation.

The talks have been overshadowed by protests against Chinese authorities in Tibet and a security crackdown there. China's response to the unrest and criticism of its rights record has sparked noisy protests that have disrupted the Olympic torch's round-the-world relay ahead of the August Games, infuriating Chinese authorities.

The government's harsh reaction has prompted calls in Europe for a boycott of the Games' opening ceremony. 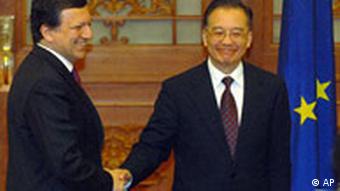 Europe has debated a boycott but Barroso has rejected the idea

Barroso deflected calls for a boycott of at least the opening ceremony of the Games. "The Olympics must be a celebration of the youth of the world and it must be a success. That is why I'm against the boycott."

For the Olympics to "be a success" they must take place "in a peaceful atmosphere," he said, adding that it was necessary that "human rights are comprehensively respected."

EU External Relations Commissioner Benita Ferrero-Waldner reiterated the EU's call for Chinese leaders to engage in a constructive dialog with the representatives of Tibet's spiritual leader the Dalai Lama to seek a stable and long-term solution in Tibet.

It was later reported by the official state news agency Xinhua that the Chinese government would begin talks with representatives of the Dalai Lama within days.

The meeting was spurred by "requests repeatedly made by the Dalai side for resuming talks," an official was quoted by Xinhua. 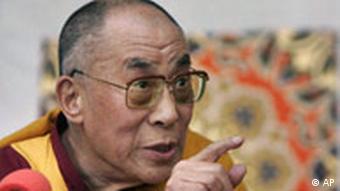 The Dalai Lama and his fellow Tibetans want dialog

China's policy regarding Tibet has not changed, said the official, who added that he hoped through dialog that "the Dalai side will take credible moves to stop activities aimed at splitting China."

They must also "stop plotting and inciting violence" and "disrupting and sabotaging the Beijing Olympic Games," in order to create conditions conducive to talks, said the official as quoted by Xinhua.

Meanwhile, Dalai Lama spokesman Tenzin Takhla welcomed the offer, saying it was a "positive step in the right direction."

"All I can say is that we have received no official communication about this. However his Holiness is committed to resolving the Tibet issue and the only way to resolve the Tibet issue is by meeting the Chinese representatives face-to-face and addressing the grievances of Tibetans," he said.

"Therefore, if talks take place it would be a positive step in the right direction," Takhla said over the phone from India's northern hill town of Dharamsala where the Dalai Lama and the Tibetan government-in-exile is based.

Ferrero-Waldner was skeptical whether direct talks with the Dalai Lama would take place. "We are not that far yet," she said, adding that she was encouraged and that there was "a very open atmosphere here, and that is already a certain breakthrough." 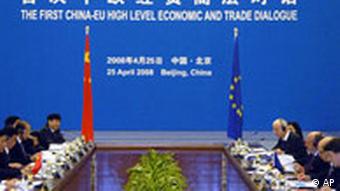 The divide between China dn the EU has grown recently

Friday's talks were the first round of a series of high-ranking meetings between China and the European Union, which had been agreed upon months ago.

Since then, relations between the two powers have been strained over the situation in Tibet and the protests around the Olympics.

China's state media acknowledged shortly after Barroso's arrival that the China-EU relationship had "soured" over Tibet.

"The main purpose is to mend the fissure that has occurred in the Sino-EU relationship," Shen Jiru, a researcher at the Chinese Academy of Social Sciences, told Xinhua.

Earlier this month European lawmakers called on EU leaders to boycott the Games opening ceremony unless China resumes dialog with the Dalai Lama.

EU's top trade official has urged Beijing to speak out against any possible boycott of European goods. They come amid a souring in Sino-EU relations over Tibet. (24.04.2008)

Germany's foreign minister called for prudence when dealing with the thorny issue of China and the Olympic Games, while France's president sent envoys to Beijing in an attempt to calm tense bilateral relations. (21.04.2008)

Is the EU sending mixed signals to China? What should be the EU's common stance? Please include your full name and country with any reply.