One of the biggest gay and lesbian gatherings in the world drew to a close in Hamburg this weekend. The 10-day festival drew 360,000 people from across Europe to the northern German city. 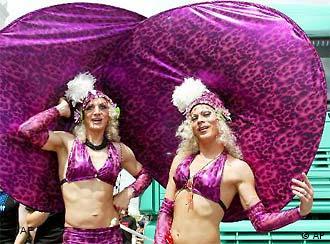 Love breaks all barriers at EuroPride

Drag queens paraded on high plateaus over cobblestone streets and sailor-costumed dancers mixed with men decked out in leather as trucks converted into mobile discos rolled through downtown Hamburg on Saturday. The city was celebrating EuroPride 2004, the biggest gay and lesbian festival in Europe.

More than 360,000 people took to the streets showing their true colors in the parade, which is the highlight of the 10-day celebrations. Twelve party trucks with booming bases and outlandish decoration, including one covered in a giant condom, churned out a thousand watts of dance music and got the spirit pumping.

Under the motto "Love breaks barriers," the 11th annual festival sought to embrace homosexuals from across Europe, and especially in the new EU member states of eastern Europe, where many gays and lesbians are still forced to keep their sexual orientation under wraps.

Hamburg's mayor Ole von Beust of the conservative Christian Democrats, who is openly gay, joined the ranks of flamboyant celebrities as an official sponsor of the festivities. On Saturday evening, German Foreign Minister Joschka Fischer of the Greens party gave the keynote speech in which he stressed the need for Germany to continue working towards integration and equality for the gay community in the areas of adoption and marriage.

Drawing attention to the situation in the new EU member states, Social Democrat Member of European Parliament Christa Randzio-Plath said of the 10 new members, only one of them had established laws prohibiting the discrimination of gays and lesbians. According to surveys conducted in eastern Europe, acceptance for homosexuality is considerably lower than in the rest of the EU.

Combining elements of carnival and political demonstrations, the parade recalled the traditional Christopher Street Day (CSD) of 1969 when homosexuals in New York first fought back against police brutality and discrimination, thus beginning the campaign for more tolerance and equality. 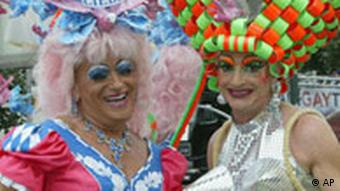 Next year's EuroPride will take place in Oslo, Norway. In contrast to Germany, where numerous CSD parades take place throughout the summer, the Scandinavian country has expressed concern over hosting the event. The Lutheran Mission, a division of Norway's state Lutheran Church, has protested holding the celebration out of fear the city would become a magnet for gays.

The Lutheran Mission, which aims to spread the word of the Bible at home and abroad, sees homosexuality in stark contrast to Christian sexual morals which are based on marriage and fidelity. For the organizers of EuroPride, opposition to the event from the religious community is little reason for concern. Norway, like other northern European countries, has a liberal political approach to homosexuality.

Homosexuality is taboo in Turkey. But in Germany, Turkish gays have more freedom. Language, however, sometimes creates problems. (Jan. 6, 2004)

The Vatican has slammed same-sex unions as "deviant" and a threat to society in a controversial document. The move has been stridently decried by gay rights activists and campaigners across Europe. (Aug. 2, 2003)