Europol says it has exposed a criminal network suspected of fixing hundreds of soccer matches involving some of the game’s biggest series. A leading expert on match-fixing told DW the probe was a "superb start." 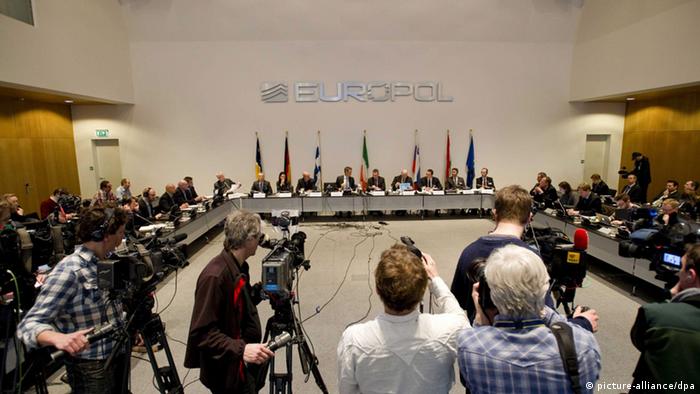 The head of Europol, Rob Wainwright, told reporters in The Hague on Monday that a wide-ranging investigation had uncovered evidence that pointed to match-fixing in more than 380 matches, including Champions League and World Cup qualifiers, played between 2008 and 2011.

"This is a sad day for European football," Wainwright said, describing it as "match-fixing activity on a scale we have not seen before."

Three hundred more matches are still under investigation, but most of these are from abroad. He also said the probe had found evidence that a Singapore-based crime organization was involved.

"This is the first time we have established substantial evidence that organized crime is now operating in the world of football," Wainwright said. This, he said, "highlights a big problem for the integrity of football in Europe."

#video#He added that the investigation had uncovered eight million euros ($10.9 million) in betting profits and two million euros in bribes paid to players and officials. Wainwright said that 420 people were involved in match-fixing schemes in 15 countries.

He said that the probe had led to several prosecutions, but did not provide details on how many. It also wasn't immediately clear how many of the matches in question had come to light in previous investigations.

He also declined to identify any of the matches, officials, players or other suspects allegedly involved, saying the investigation was ongoing.

'A great day for European football'

Declan Hill, an investigative journalist who is regarded as one of the world's leading experts in match fixing told Deutsche Welle that the Europol investigation was a 'superb start' in efforts to tackle what is a global problem.

"It is excellent to have those people working on this. I can't speak highly enough of the superb work done by the Bochum task force," Hill said referring to a team of German investigators who have been on the case for several years.

Hill said that contrary to Wainwright's assessment this was "a great day for European football, because finally somebody is standing up for the game."

However, he noted that the investigation had also shown that the problem of match-fixing in European football was not limited to Europe.

Hill, the author of the book The Fix: Soccer and Organised Crime, also called on the authorities to detain Dan Tan, an alleged major “fixer” based in Singapore, for whom Interpol has issued an arrest warrant.

"Not a single match fixer has been arrested in Asia, it's outrageous," Hill said.

In a statement to the Reuters news agency late last month, Singapore police said that Dan Tan Seet Eng had not been charged with any offence in that country.

"We wish to reiterate that Singapore takes a strong stance against match-fixing and is committed to working with international enforcement agencies to bring down trans national criminal syndicates, including those that involve the acts of Singaporeans overseas, and protect the integrity of the sport."

Match-fixing allegations are nothing new

There have been a number of high-profile match-fixing scandals in recent years. The "calciosommesse" illegal betting affair, in which several players were arrested, overshadowed Italy's preparations for last year's European Championship in Poland and Ukraine.

In 2005, German referee Robert Hoyzer confessed to fixing and betting on matches in the second division of the Bundesliga, the German Cup, and the third division. The German FA subsequently banned Hoyzer for life from refereeing football matches. A Berlin court also handed him a 29-month jail sentence.