While Greece and Italy have so far laid claim to Europe's oldest civilizations, Germany's struggling eastern regions seem set to challenge this. 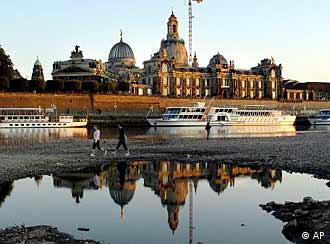 Dresden: Baroque on top, ancient underneath?

That's because one of the most complex centers of what's likely Europe's oldest civilization has been discovered in Dresden as archeologists have unearthed traced of the ancient culture across the continent, The Independent newspaper said Saturday.

More than 150 large temples, constructed between 4,800 BC and 4,600 BC, have been unearthed in fields and cities in Germany, Austria and Slovakia, predating the pyramids in Egypt by some 2,000 years, the newspaper revealed. 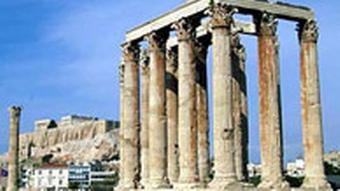 The German temples weren't quite as sturdy as those in Greece

The network of temples, made of earth and wood, were constructed by a religious people whose economy appears to have been based on livestock farming, the paper reported.

Excavations have taken place over the past three years but the discovery is so new that the civilization has not yet been named.

The most complex center discovered so far, beneath the city of Dresden in Saxony, eastern Germany, comprises a temple surrounded by four ditches, three earthen banks and two palisades.

"Our excavations have revealed the degree of monumental vision and sophistication used by these early farming communities to create Europe's first truly large scale earthwork complexes," said Harald Stäuble from the heritage department of the state of Saxony, where Dresden in located.

The temples, up to 150 meters (164 yards) in diameter, were made by a people who lived in long houses and villages, the newspaper said. Stone, bone, and wooden tools have been unearthed, along with ceramic figures of people and animals.

A village at Aythra, near Leipzig in eastern Germany, was home to some 300 people living in up to 20 large buildings around the temple.

A project to faithfully reconstruct a 7,000 year-old solar observatory, the oldest of its kind in Europe, began this week at Goseck in the German state of Saxony. (June 3, 2005)

How humanitarian aid makes its way from Germany to Ukraine 15.05.2022

Relief supplies for Ukraine are collected in the German city of Dresden and taken to northern Romania, where they are picked up by volunteers from Chernivtsi in Ukraine. It is a special aid route.