European Rosetta Probe Flies Past Mars | Europe | News and current affairs from around the continent | DW | 25.02.2007 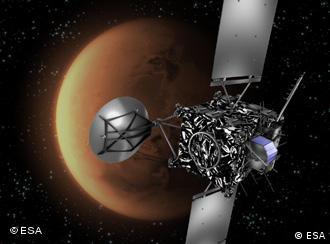 A graphic rendering of Rosetta flying past the red planet

During a dramatic 15 minutes, the probe disappeared from mission control screens as it passed the far side of Mars in relation to earth. The spacecraft was forced to switch from solar to battery power for even longer as it traversed a Martian solar eclipse, ESA said.

"We lost the radio signal when Rosetta moved behind Mars, and it reappeared as expected 15 minutes later," said ESA spokeswoman Elso Montagnon.

Rosetta came within just 250 kilometers (155 miles) of the red planet and used Martian gravity to swing its course onward, as it pursues its looping mission around the solar system in what ESA has called a game of "cosmic billiards.

"The big suspense of this evening was the eclipse," Montagnon said.

For a full 25 minutes Mars completely shut the probe off from the light of the sun. Deprived of the energy it otherwise captures from two huge solar panels, it continued to speed along at 39,191 kilometers per hour functioning on battery power.

"It was the first time since its launch that Rosetta crossed an eclipse," Montagnon said. "We could not be 100 percent sure that the batteries would be up to the job. It was a fairly critical moment."

Because the spacecraft was on the far side of Mars, mission control were completely in the dark during the switchover from solar power. The probe was not designed to run on battery power, whose primary function was to add stability after takeoff. 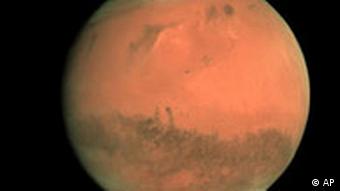 The billion-euro ($1.3 billion) Rosetta, launched in 2004 on a 10-year voyage of some seven billion kilometers, took a series of pictures as it passed Mars between 2 a.m. and 2:40 a.m. GMT, the agency (ESA) said in a statement.

"Clouds are visible at the north polar cap of Mars and at the morning 'limb' (the outermost edge of a celestial body)," ESA said. "A high altitude cloud is also visible."

Passing Mars, the craft "changed direction and then sped away from the red planet on a brand new path, continuing on a journey that will ultimately take it beyond Jupiter's orbit," the agency said.

ESA's head of missions Manfred Warhaut said the fly-past of Mars was the most delicate stage of the mission since its launch. Rosetta now heads for Earth, where it is due to arrive in

November for another dramatic fly-past. Rosetta is scheduled to hook up with Comet Churyumov-Gerasimenko in 2014 after a voyage of 7.1 billion kilometers.

"Today we have reached another milestone on the way to finding an answer to questions such as whether life on Earth began with the help of comets," the agency's director of science, David Southwood, was quoted as saying in an ESA statement. "This is only the beginning. The true excitement of targeting and releasing the lander on the comet's nucleus is yet to come."