The European Parliament approved a new slate of commissioners for a five-year term on Tuesday. Commission President Jose Manuel Barroso says the economy is top of their list of priorities. 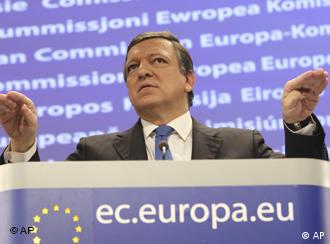 The European Parliament approved the European Commission for its next five-year term Tuesday, clearing the way for the 27-member body to take office.

The new EU executive, with one member from each EU state, was voted in with a clear majority with 488 in favor, 137 against and 72 abstentions. The overwhelming approval gives the commission “a real mandate for boldness,” said European Commission President Jose Manuel Barroso after the vote.

Barroso has said the economy is his top priority. "Over the next five years, I hope that this commission will play a key role in bringing Europe out of the crisis with a competitive economy which provides our citizens with sustainable growth and prosperity.”

Also among the commission's priorities are financial reform, climate change and an overhaul of the EU's 130-billion-euro ($178-billion) budget.

About a third of that budget funds the EU's farm policy, which primarily benefits France. French officials are eager to defend the agricultural spending against critics like Britain, which wants to see the budget trimmed. 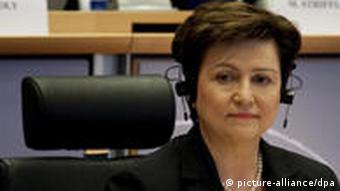 Kristalina Georgieva has found support for her nomination as Bulgaria's commissioner

Approval of the incoming European Commission was originally expected in October, when the previous commission's mandate expired. But delays in the ratification of the bloc's sweeping Lisbon Treaty reforms as well as fierce opposition to Bulgaria's nominee for humanitarian aid commissioner pushed the vote back three months.

The nominee, Rumiana Jeleva, faced serious criticism from some European parliamentarians who questioned her financial affairs and alleged her husband had ties to the mafia.

Ashton's position was created by the Lisbon Treaty in an effort to increase the EU's sway in global politics, but critics say her relatively low profile and lack of foreign policy experience make her a less-than-ideal candidate. Ashton is also set to become the European Commission's vice president.

Meanwhile newly appointed EU Council President Herman Van Rompuy, whose job was also created by the Lisbon Treaty, emerges from the shadows on Thursday as he hosts a summit of EU leaders to address the economic crisis.

What is the European Commission?

The European Commission's direction in the next few months could change the political make-up of Europe for years to come. Deutsche Welle takes at look at what is it and what it does? (09.02.2010)

Bulgaria's nominee to the European Commission reportedly performed well in the face of parliamentary scrutiny. Kristalina Georgieva now looks set to be the new European commissioner for humanitarian assistance. (03.02.2010)

Approval for the new European Union Commission was delayed after the Bulgarian nomineee was forced to resign. Now a World Bank official will replace her and the process is back on track. (21.01.2010)

Bulgaria's nominee for the post of EU commissioner, Rumiana Jeleva, withdrew her candidacy after fellow politicians accused her of concealing business ties. Bulgaria has named a World Bank official to replace her. (19.01.2010)