European Parliament Approves Military Use of Galileo Satellite | Europe | News and current affairs from around the continent | DW | 10.07.2008

The European Parliament in Strasbourg approved by 502 votes to 83 the military use of the European Union's Galileo satellite. 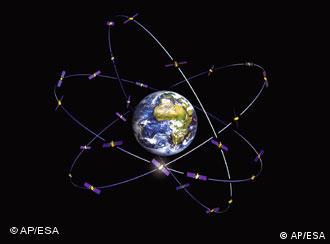 The EU hopes to compete with the American GPS

The bill, proposed by German conservative politician Karl von Wogau, aims to create a space surveillance system to watch out for space debris and other threats. It was approved on Thursday, July 10.

Changes to the bill proposed by the Greens to use the system purely for civilian purposes were rejected.

Secure, independent and sustainable access to space was a basic requirement for the EU, the text of the draft bill said.

The system was about acquiring information so that the EU could prevent conflicts, be effective during crises and increase world security by, for example, monitoring the proliferation of weapons of mass destruction.

"The EU and NATO are expressly called upon to start up a strategic dialogue on the politics of space and missile defense," the text of the bill said.

Galileo to include 26 satellites

The EU's 2007-13 budget has set aside 5 billion euros ($7.8 billion) for space projects and defense, according to Wogau, who also chairs the European Parliament's Security and Defense Sub-Committee. Security research is to get 1.4 billion euros, while the Galileo satellite navigation system will get 3.4 billion euros.

The second test satellite for the multi-billion-euro system was launched into space at the end of April. The EU plans to send a total of 26 navigation satellites into orbit as part of the Galileo system.

At the beginning of April in Luxembourg, the EU's transport ministers agreed on the groundwork for the planned launch of the system in 2013 following a test period.

The Galileo system aims to compete with the US Global Positioning System (GPS).

After agreeing to pay for Galileo entirely from public funds, EU transport ministers decided how contracts for the satellite navigation system would be parceled out to European companies. (30.11.2007)