Events to mark amid the 70th anniversary of the European Union have been called off due to the coronavirus pandemic. Europe has "grown in the crisis," Germany’s foreign minister said, while others criticized the bloc. 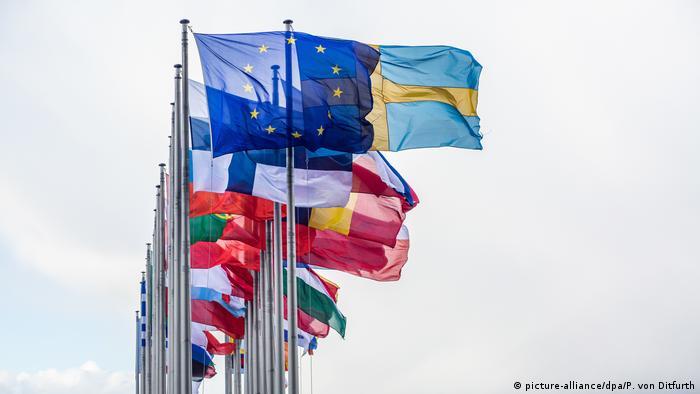 The European Union marked the 70th anniversary of its foundation in a muted fashion on Saturday, with lockdowns and restrictions on public life still in place across many member states.

EU institutions had planned to open their doors to the public as part of Europe Day celebrations. Instead, events and exhibitions were moved online.

European Parliament President David Sassoli invited organizations "that contribute every day to changing and improving the living conditions of the most disadvantaged and vulnerable people" to participate, with some invited in person to a socially distanced event in the parliament building in Brussels.

"People and civil society are the driving force behind the European project," Sassoli wrote on Twitter.

German Foreign Minister Heiko Maas said the Union has "grown in the crisis," referring to the joint work the EU has done to tackle the crisis. He also acknowledged that most EU countries, including Germany, were "not well-prepared" for the pandemic.

Sweden: 'Cooperation is our cure'

The coronavirus crisis has led to old divisions within the EU being brought to the surface again, as hard-hit southern countries like Italy and Spain claim there has been a lack of solidarity from northern countries like Germany and the Netherlands.

Sweden, one of the few EU countries to avoid a large-scale lockdown, called for more cooperation in the EU.

"There is no doubt that solidarity and coordination within the EU sometimes failed at the beginning of the coronavirus crisis," Swedish Prime Minister Stefan Lofven said.

"What we have learned from previous crises is that cooperation is our best cure," Lofven continued.

The 70th anniversary also sees the first Europe Day since a member state has officially left the bloc, after the UK exited the EU in January. The pandemic has complicated the negotiations for the future relationship between the country and the remaining 27 members.

Europe Day marks 70 years since the creation of the Council of Europe on May 9 1950 with the signing of the Schuman declaration, named after French Foreign Minister Robert Schuman. This is considered the founding charter of what became the European Union and was integral in overcoming French-German post-war tensions.

A European Commission iniative has raised billions to develop a vaccine and treatments for the virus. Leaders said that any potential vaccine should be "available, accessible and affordable to all." (04.05.2020)

The German Constitutional Court and the European Court of Justice are in a bitter fight over jurisdiction. The German court is accused of overstepping the mark in a controversial ruling on a European bond-buying program. (08.05.2020)