Europe Calls For Stronger UN Presence in DR Congo | Europe| News and current affairs from around the continent | DW | 19.11.2008

The European Union on Wednesday said a lasting dialog is necessary in the Democratic Republic of Congo. The French EU presidency, however, said a military solution was not the answer. 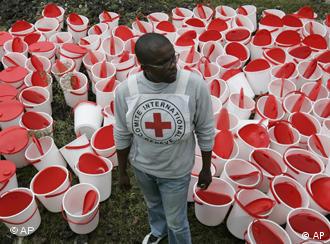 Distributing humanitarian aid is a major challenge in DR Congo

The crisis in the Democratic Republic of Congo should be resolved by a "balanced political solution based on dialog," according to the European Union.

EU External Relations Commissioner Benita Ferrero-Waldner and French European Affairs Minister Jean-Pierre Jouyet said a further dialog had to include the UN, the EU, the African Union as well as regional African organizations. Both politicians were speaking before the European Parliament in Strasbourg on Wednesday, Nov. 19. 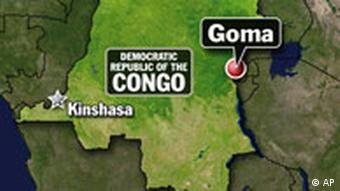 "Let's be clear and lucid, this crisis cannot be resolved without boosting the means for peace stabilization, particularly those of the United Nations," said Jouyet, whose country currently holds the EU's rotating presidency.

Earlier this week, France submitted a draft resolution at the UN Security Council to add 3,000 soldiers and police to the 17,000-strong UN mission in DR Congo, MONUC.

"We want them to reach a result very quickly," Jouyet said. He said the EU was willing to increase its financial contribution to the UN in order to help stabilize the region. 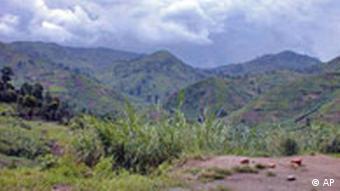 "The mandate should be extended, for example, in terms of its control over the pillaging of natural resources," she said. MONUC forces have come under criticism for failing to do enough to stop the violence.

Ferrero-Waldner said she was "very pleased" with the latest diplomatic efforts by other African countries and individuals. But now it was "high time to analyze the real causes for the crisis," she said. This included looting mines and oppressing minorities.

Several members of the European parliament said international companies should also be made to accept responsibility for controlling the exploitation of DR Congo's natural resources. The country's diamonds, zinc, gold and coltan are used in the communications and consumer electronics industries.

Rebel chief Laurent Nkunda told the German weekly Die Zeit he wanted to extend his control to include the entire country. 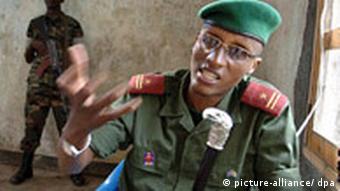 General Nkunda aims to take over the whole of Congo

"Under my leadership, the DR Congo will be sitting in the UN Security Council representing Africa within five years time," Nkunda said in an interview published Wednesday.

He accused the current government of failure, saying it had sold out the country to the Chinese and cooperated with "criminals."

Nkunda has promised to take action against the ever-present corruption in DR Congo and make it an internationally recognized country.

The UN mission in DR Congo said Wednesday that Nkunda's rebels had started withdrawing from conflict zones around two towns in the east of the country. More than 250,000 people have been displaced since fighting erupted between Nkunda's rebels and the military in Nord-Kivu province in late August.

The Congolese army and Tutsi rebels have engaged in some of the worst clashes for a week despite rebel leader Laurent Nkunda saying he supports peace in eastern Democratic Republic of Congo, the UN said Monday. (17.11.2008)

Amid increasing violence in DR Congo, aid agencies are struggling to offer help for civilians. But more than anything else, the region needs a diplomatic solution, says one humanitarian aid spokesman. (14.11.2008)