RB Leipzig secured one of their biggest victories of the season, beating Serie A leaders Napoli at the Stadio San Paolo to take control of their Europa League tie. Leipzig are now favorites to progress to the last 16. 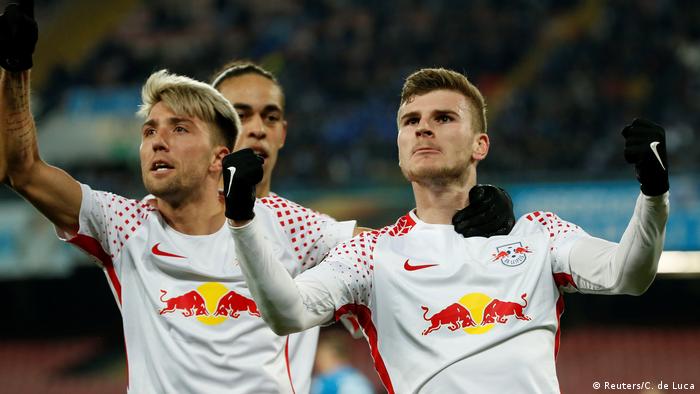 RB Leipzig secured the most eye-catching win of their debut European campaign, producing a mature away performance to beat high-flying Napoli.

After a dire first half in front of thousands of empty seats at the Stadio San Paolo, Napoli stepped things up after the break. The Italian side, who lead Juventus at the top of Serie A having lost only one league game all season, survived a scare when Timo Werner went close for Leipzig — and they made the Bundesliga side pay moments later, when Adam Ounas put the hosts ahead.

But the lead lasted barely nine minutes when Ralph Hasenhüttl's side struck back through Werner. Kevin Kampl's low cross from the right was dummied by Yussuf Poulsen to allow Werner to strike it first time beyond Pepe Reina.

Leipzig sensed the hosts' fragility and took the lead through Bruma, who stroked the ball into an empty net after Poulsen beat the Napoli offside trap and squared it to his grateful teammate for the easiest of finishes.

Things got even better for Leipzig in stoppage time when Napoli were caught out on the break. Emil Forsberg drove forward unchallenged and put it on a plate for Werner, who didn't break stride as he swept in his second and Leipzig's third to put the Bundesliga side in complete control.

Napoli were without top-scorer Dries Mertens, whose 18 goals this season have helped propel them to the summit of Serie A, but Leipzig will be more than satisfied with their night's work and, even with Mertens set to return, will fancy their chances of completing the job back in Germany next Thursday.