EU Wary of Being Dragged Into Britain-Russia Diplomatic Row | Europe | News and current affairs from around the continent | DW | 19.07.2007

EU Wary of Being Dragged Into Britain-Russia Diplomatic Row

Despite a statement saying it was "disappointed" by Russian failure to cooperate with the UK, the European Union is staying firmly on the sidelines in the escalating diplomatic row between London and Moscow. 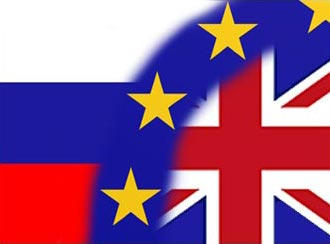 As relations between Britain and Russia reach the lowest point since the Cold War, the European Union stands to one side, unwilling to get involved in what could turn out to be one of the most serious diplomatic spats between east and west in over a decade.

Britain expelled four Russian diplomats on Monday after Russia refused to extradite Andrei Lugovoi, a suspect in the murder of Kremlin critic and former KGB agent Alexander Litvinenko, who was poisoned with radioactive material in London last November.

Shortly after the expulsion, British diplomats turned to the EU for support -- and came up against a wall of indifference in most cases. 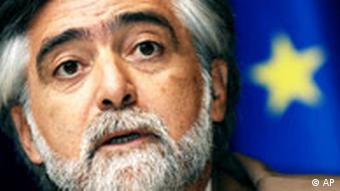 A statement eventually materialized Thursday, but Portuguese Foreign Minister Luis Amado's assertion that the diplomatic row was "disappointing" and "a bilateral issue" between Britain and Russia hardly threw the bloc's weight behind the Brits.

The statement by the Portuguese did however say the issue "raises important questions of common interest to EU member states," adding that Litvinenko's murder was "a grave and reckless crime."

Surprisingly, given their level of animosity over issues both serious and trivial throughout history, the French were the most vocal when it came to supporting British Prime Minister Gordon Brown's decision to throw the Russians out.

"The murder of a British national on his home soil, using a substance that put at risk the lives of thousands of others is a particularly serious matter," said French Foreign Minister Bernard Kouchner. "Given the gravity of the matter, we stand alongside the United Kingdom in its concern that justice be done.

"We call on Moscow to respond to the demands of British justice in a constructive manner ... so that the perpetrators of this crime are brought to justice and punished," he added.

"Britain appeals for EU solidarity," Grushkov said in his statement. "We hope that common sense will prevail within the EU and that its members will not give in to attempts to turn relations between Russia and the EU into a tool to achieve unilateral political goals. These have nothing in common with EU and Russia's real partnership interests." 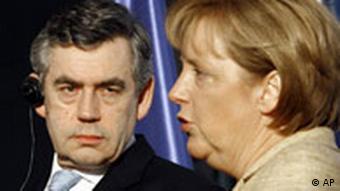 Brown wanted Merkel's support; he didn't get it

Germany was one of the many other EU nations which viewed the situation from a distance. Despite Prime Minister Brown's visit in person to Berlin to press Chancellor Angela Merkel for her support, Germany remained firmly on the fence but did say that it thought Britain had "overreacted" by expelling the four Russian diplomats and freezing bilateral negotiations on visas.

Steinmeier on Wednesday had expressed his hope that the row would not be allowed to escalate into "a crisis."

In terms of relations with Russia, Germany is the main player in the European Union and therefore has the most to lose from coming down on the side of the Brits.

Russia considers Germany to be its most important economic partner in the EU and the statistics on trade between the two nations confirms this view. Trade between the two countries increased by almost 40 percent in 2006 while German exports to Russia went up by 35 percent.

Germany and Russia are also driving Europe's energy agenda and if the bloc is to secure its supply from the east, then relations between the two sides have to be good.

Russia warns EU to stay out of row 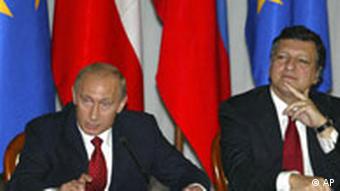 Putin's Russia has a lot of leverage over the EU

Russia for its part has warned the EU to stay out of the row and Vladimir Chizhov, Russia's EU representative in Brussels called the EU Presidency's lukewarm statement on Wednesday "an unpleasant surprise for us."

Despite the lack of any real commitment on Europe's part, Chizhov was quoted as saying by the Interfax news agency that the EU statement would "affect relations between the EU and Russia."

While disappointed by Europe's relatively non-committal stance in the row, British Foreign Minister David Miliband is unlikely to give up trying to garner support.

He is expected to lobby his EU counterparts at the next EU foreign minister meeting in Brussels on Monday but observers believe that unless Russia reacts again, and more strongly this time, the EU will continue to sit out the row on the sidelines.

In a tit-for-tat action reminiscent of Cold War politics, Moscow told four British diplomats on Thursday that they are no longer welcome to stay in Russia. The move comes after the UK expelled four Russians Monday. (19.07.2007)

Amid a growing diplomatic row that threatens to affect the European Union's ties to Russia, Moscow said it intends to put a halt to cooperating with London on counter-terrorism and security matters. (17.07.2007)