EU Warns Turkey to Step Up Reforms to Avoid ″Train Crash″ | Europe | News and current affairs from around the continent | DW | 03.10.2006

Turkey faces a "train crash" in its relations with the European Union if it fails to step up democratic reforms and resolve a trade row with Cyprus, EU enlargement chief Olli Rehn has said. 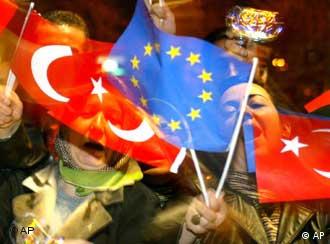 The stern warning came on the first anniversary of the inauguration of Turkey's accession talks and just weeks before the EU issues on Nov. 8 a crucial report on the country's progress towards EU membership. German Chancellor Angela Merkel is due to begin a state visit to Ankara on Thursday.

"I want to make sure that the first anniversary (of the accession talks) is not the last one," Rehn told a news conference. "I want to work for avoiding a train crash in Turkey-EU relations."

Highlighting the benefits of Turkey's EU membership, the enlargement commissioner said it would ease mounting tensions between the West and Muslim countries if Turkey carries out the necessary reforms and meets all EU criteria.

"In the current situation when... relations between Europe and Islam is the greatest challenge of our time, it simply won't make sense to allow the things to lead to a train crash," he said. 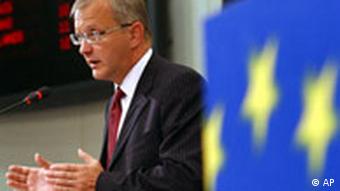 Rehn urged Turkey to get rid of its infamous Article 301

Rehn urged Ankara to pass reforms to ensure freedom of speech, a major area of concern after dozens of intellectuals were charged with denigrating the Turkish nation under a penal code article, and to grant trade privileges to Cyprus under a customs union agreement.

"Freedom of expression is a cornerstone of our common democratic values. I cannot even imagine a member of the EU that will not respect such a fundamental European principle," Rehn said earlier at a conference on trade union rights.

A string of intellectuals, including best-selling writers Orhan Pamuk and Elif Shafak, have stood trial under Article 301 of the penal code, which envisages up to three years in jail for insulting "Turkishness" and state institutions. No one has yet been imprisoned under the provision, but the appeals court in July upheld the suspended six-month sentence of a Turkish-Armenian journalist, setting an alarming precedent for pending cases. 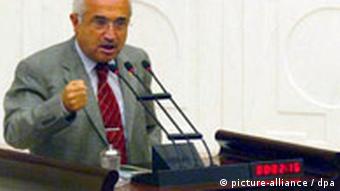 Prime Minister Recep Tayyip Erdogan has said he is open to proposals to amend the article, but no action has been taken so far amid vocal opposition by nationalist-minded Justice Minister Cemil Cicek.

Speaking after talks with Rehn, Cicek rejected EU pressure to amend Article 301 before the crucial Nov. 8 report, arguing that "parliament is not under the government's command," and that an upsurge in Kurdish rebel violence this year was making it harder for Ankara to expand freedoms.

He also charged that freedom of speech was being breached in EU countries, pointing to a French draft law that would make it a punishable offense to deny that the massacres of Armenians under the Ottoman Empire amounted to genocide.

"While asking why freedom of expression is being restricted in Turkey, one cannot turn a blind eye to a draft law that will be taken up on October 12 in an EU country," he said.

On the row over Cyprus, Rehn said he was hopeful that a formula proposed by the EU's Finnish presidency would resolve the stalemate. 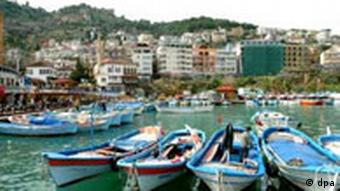 Turkey is under pressure to open its air and sea ports to the internationally recognized Cyprus government under a customs union agreement with the EU, or face a suspension of its membership talks.

Ankara insists that Cypriot ships and planes will remain barred from Turkish ports unless the EU delivers on its promise to ease trade restrictions on the island's breakaway Turkish Cypriot state, recognized only by Turkey.

"The Finnish formula has not been rejected by any of the parties so far, including Turkey," Rehn said. "I trust all parties sense the seriousness of the issue and try their best to find a solution."

He also called on Ankara to improve the rights of women and non-Muslim religious communities as "other very important issues of urgency."

In another sticking point, Rehn urged the government to keep up reforms to strengthen civilian control over the influential Turkish military "like in any European democracy." 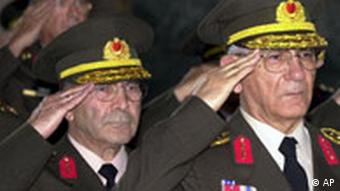 Turkey's military still has too much power, Rehn suggested

On Monday, chief of staff Yasar Buyukanit angrily rejected EU criticism of its influence in politics, saying that the charges had exceeded "the limits of tolerance," and asserted the army's right to have a say on issues concerning national security and the protection of Turkey's strictly secular system.

Rehn was scheduled to meet with Erdogan, Foreign Minister Abdullah Gul as well as other officials before he wraps up his visit Thursday.

A Turkish court has acquitted author Elif Shafak in a trial over a book about the massacres of Armenians during World War I, saving the government from fresh embarrassment in its ties to the European Union. (22.09.2006)

Turkish Foreign Minister Abdullah Gül meets EU representatives in Vienna on Wednesday. The bureaucratic process for EU membership negotiations is on track, but the political climate is a different story. (08.03.2006)