Long considered by many of its citizens to be an insular and bloated bureaucratic behemoth, the European Union is launching a colorful charm offensive to change its dull image and win hearts and minds. 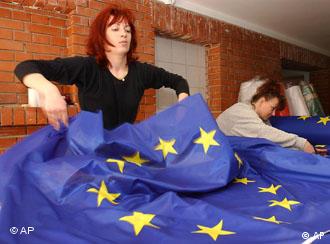 The EU needs to inject some spark into its dull fabric

Seen from a distance, Brussels can sometimes appear to be one of the most opaque places on the planet. With its suited technocrats seemingly perpetually wrangling over issues that make little sense to ordinary people or creating complex directives resulting in further red tape, it's little wonder that mention of the EU elicits groans or, at worst apathy, around the bloc.

But the European Union is now all set to inject some pizzazz into its dull image in the form of an advertising campaign. The charm offensive is to include concerts, carnivals and parties across the 25-member bloc, a new logo and signature tune. The hoopla is set to coincide with the 50th anniversary of the EU next year; one of the founding treaties of the EU was signed in 1957. 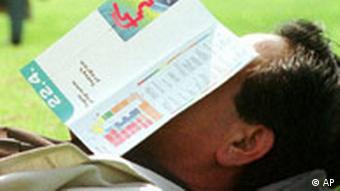 The EU can have a stunningly soporific effect

"We have huge plans to bring the EU closer to the man on the street," an EU representative told news agency Reuters. "The aim is to propel the EU into the people's consciousness and show that the EU can be fun."

It's debatable whether the EU can ever be that. But at the same time it's an undisputed fact that Brussels is in sore need of an image makeover after the recent string of setbacks it has suffered.

The EU's popularity level is currently at an all-time low. A recent survey of 25,000 Europeans showed that just 39 percent believe the EU is on the right path. Less than half of the EU citizens -- 49 percent -- described it as a "good thing." 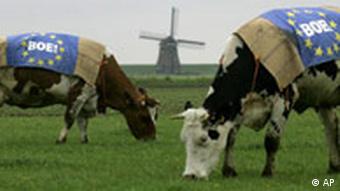 The widespread notion that the EU is run by elitist and insular bureaucrats was reflected in last year's humiliating defeat for the bloc when voters in France and the Netherlands -- both founding members of the union -- rejected the EU constitution in referendums.

Can the EU dance?

For all its shortcomings, it's not the first time the EU has attempted to win back floundering trust from its citizens.

The European Commission has kick-started several initiatives in the interest of consumer protection, such as ordering mobile phone and credit card companies to lower prices within the bloc. The shock inflicted by last year's constitutional crisis has also deepened the realization in Brussels that it has to take steps to sell itself better. 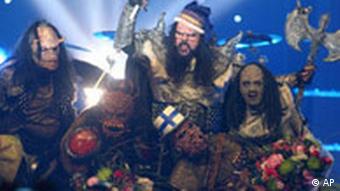 The ambitious public relations campaign is set to kick off this month with a competition for a logo and an advertising slogan. A proposal by Belgium for an EU-wide music and dance festival à la Eurovision Song Contest is set to be one of the main highlights.

"We want to show that the EU can dance," it said in the bloc's plans for the campaign.

Finnish heavy metal band Lordi kept their promise to "bring rock to Eurovision", handing their country its first title in the annual song contest's 51-year history with an explosive victory in Athens early Sunday. (May 21, 2006)

The European Union admitted Saturday there is no hope of rapidly reviving its ailing constitution but sought more time to reflect, a year after French and Dutch voters rejected the controversial pact. (May 27, 2006)