EU Treaty Doubters in Minority as Moment of Truth Arrives | Europe | News and current affairs from around the continent | DW | 18.10.2007

EU Treaty Doubters in Minority as Moment of Truth Arrives

After months of political skirmishes, EU leaders are expected to clinch a long-awaited deal on the European treaty, a document many claim will make the EU more efficient and give it more credibility. 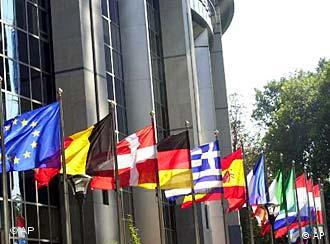 Despite the assertions that the EU will finally get a new treaty which will make it easier for the bloc to manage itself, there are still some who harbor reservations.

The two-day informal summit beginning in Lisbon on Thursday, Oct. 18, will bring the reformed treaty one step closer to a final agreement, with representatives of the 27 EU member states expected to agree on the final text. But failure is still possible for the document.

The issues of a Polish request for a mechanism allowing minorities to delay decisions that they do not like to be made legally binding and British demands to be granted an opt-out on European policies in the field of justice and domestic affairs are expected to dominate the talks. 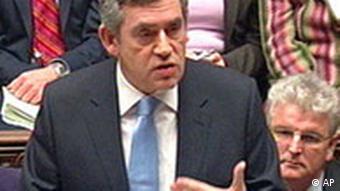 Will Gordon Brown's "red lines" be responsible for axing the reform treaty?

However, a number of countries, including Austria, Britain, Denmark and Italy, have also expressed concerns -- not all of them strictly connected to the treaty's contents. With the treaty relying on unanimity to get through to the final stage at a summit in Brussels in December, any one country, if dissatisfied, could send the EU planners back to the drawing board.

On the positive side, the treaty has the strong backing of EU heavyweights Germany and France, in contrast to the constitution draft that preceded it and was rejected by Dutch and French voters in 2005.

Opposition getting quieter and quieter

As the Lisbon meeting gets closer, fewer and fewer dissenting voices can be heard. 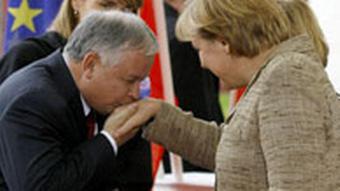 Lech Kaczynski has been more positive of late

The Czech Republic, whose euroskeptic governing coalition had previously warned that the treaty would devolve too much power to Brussels, recently described it as "a reasonable compromise."

Even Poland, by far the most critical voice, has been scaling down its objections in the run-up to the meeting.

"I am convinced it will be a success," Polish President Lech Kaczynski said ahead of a meeting with German Chancellor Angela Merkel in Berlin last Friday.

Comments of this nature have encouraged diplomats and experts in Brussels to become "quietly optimistic" that community spirit will prevail over national interests once leaders gather in the Portuguese capital.

If a deal is indeed clinched in Lisbon, it will represent a key step forward in giving the world's biggest economic entity a much-needed political boost. 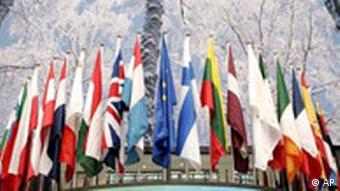 The EU table creaks under the weight of enlargement

EU leaders first realized they would have to improve the bloc's laborious decision-making process in view of its enlargement to 27 member states at the beginning of the new millennium. Before they can be put in place many decisions in the bloc require unanimity, which has become harder and harder to find in the expanding union.

In December 2001, EU leaders meeting in Laeken, Belgium, agreed to set up a convention on the future of the EU chaired by former French President Valery Giscard d'Estaing. The convention led to the constitutional treaty, which was signed in October 2004, only to be ditched after it was given the thumbs-down by referendums held in France and the Netherlands a year later.

There followed what came to be known as a "period of reflection," until the German presidency of the EU, in the first half of 2007, succeeded in reopening the debate, which ultimately led to the current draft.

Shadow on constitution remains despite amendments

The treaty under discussion in Lisbon drops many of the symbolic references that were included in the proposed constitution, such as an EU flag and anthem, but preserves many of its key elements. 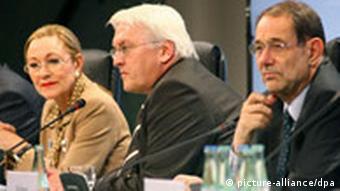 The jobs of Ferrero-Waldner (r.) and Solana (l.) will merge

These include simplifying the EU's relations with non-members by creating a single foreign affairs chief and ending the system of a six-month rotating presidency in favor of an elected European Council president.

The treaty also preserves a complex double-majority rule for council decisions. Proposed EU legislation requiring a qualified majority would have to muster the support of 55 percent of member states representing 65 percent of the EU's total population of nearly 500 million people.

If the draft text is approved, it will have to be formally signed at a ceremony tentatively scheduled for the end of the year and then ratified in all 27 member states before European Parliament elections are held in 2009.

Dossier: The EU Treaty -- A Blueprint for Europe's Future?

The European treaty has loomed large on the horizon of the EU political landscape for the past few weeks as EU leaders prepare to agree on the treaty's final text on Oct. 18-19. (16.10.2007)

Should the European Union continue to expand? Please include your full name and country in your reply.