EU to Present Eastern Partnership Proposal | Europe| News and current affairs from around the continent | DW | 01.12.2008

The European Union is to present Wednesday a partnership proposal for its eastern neighbours, an EU official has said. 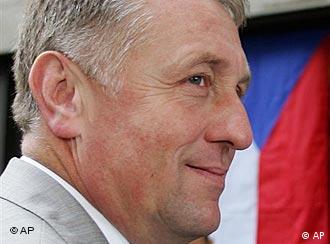 Mirek Topolanek's government will assume responsibility for the Eastern Partnership

The so-called "Eastern Partnership" initiative will aim at offsetting strained ties with Moscow and seek to introduce economic and political reforms to states on Europe's eastern flank.

It will also act as a counterbalance to the new Mediterranean union, launched in July by the French EU presidency.

The proposal is to become a focal point of the upcoming Czech presidency of the EU which is set to begin Jan. 1 next year.

The commissioner said the proposal would denote "a real investment... in order for the Eastern countries to really have a chance to get closer to us."

Ferrero-Waldner said she would not disclose further details before Wednesday.

The proposal requires approval by the European Council and parliament.

Czech Prime Minister Mirek Topolanek has said he was dedicated to ratifying the European Union's Lisbon Treaty prior to his country taking over the bloc's presidency.

The Czech Constitutional Court recently rejected a complaint against the EU's reform treaty, paving the way for Topolanek's pledge to become a reality.

The ruling by the 15-member court in Brno allows the Czech parliament to vote on the Lisbon Treaty -- aimed at streamlining the way the EU works -- before Jan. 1. Discussions will start on Dec. 9.

The decision puts the focus back on Ireland, the citizens of which voted down the Lisbon Treaty in a June referendum.

The Constitutional Court of the Czech Republic has rejected a complaint against the EU's reform treaty. The decision clears the way for the Czechs -- and perhaps another member state -- to ratify the document. (26.11.2008)

NATO and the EU have expressed concern after shots were fired Sunday at a convoy carrying the Georgian and Polish presidents near South Ossetia. Poland's leader Lech Kaczynski later pointed the finger at Russia. (24.11.2008)