The European Union has urged protestors in Bangkok to vacate the airports where demonstrations have left more than 100,000 passengers stranded. 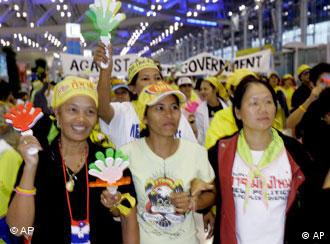 The EU told the protestors to go home

EU ambassadors to Thailand said in a joint statement on Saturday, Nov. 29, that the continued anti-government demonstrations were harmful to Thailand's image.

"While respecting the right of protesting and without interfering in any way with the internal political debate in Thailand, the EU considers that these actions are totally inappropriate," the statement said.

"They are seriously damaging the international image of Thailand."

Thai Prime Minister Somchai Wongsawat on Saturday said that the country risks international isolation is the demonstrators do not leave the airports in Bangkok.

PM open to negotiation, not to new elections

Somchai has declared a state of emergency at both airports. Police have cordoned off the main international airport, though they have not yet forced the protestors off the premises.

"To lay siege to the airports is extremely dangerous," said the premier. "It would make foreign countries lose confidence in Thailand. They will not fly their aircraft in or allow their citizens to travel here."

"We call all parties in Thailand to take steps to resolve the crisis and resort public order, respecting the rule of law and the country's democratic institutions," read the EU statement.

On Saturday, Somchai said he was willing to talk with protest leaders, but would refuse to resign or dissolve parliament.