EU Reaffirms Support for Georgia in Spat with Russia | Europe | News and current affairs from around the continent | DW | 12.05.2008

EU Reaffirms Support for Georgia in Spat with Russia

EU ministers in Tbilisi reaffirmed their backing of Georgia's "territorial integrity" amid fears that growing hostilities with Russian-backed separatists regions could lead to open conflict. 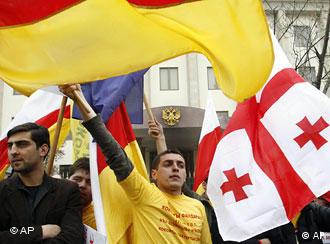 Georgians don't want Russia to meddle in their affairs

"The European Union reiterates its support for Georgia's sovereignty, independence and territorial integrity within the internationally recognized borders," Slovenia's Foreign Minister Dmitrij Rupel, whose country currently chairs the EU presidency, was quoted by Itar-tass as saying on Monday, April 12.

The foreign ministers of five European states - Latvia, Lithuania, Poland, Sweden and Slovenia - were in the Georgian capital Monday to probe into escalating tension between Moscow and Tbilisi over Russia's support for the breakaway region of Abkhazia.

Georgian President Mikhail Saakashvili pleaded for the EU and NATO's support against what it called Russia efforts to annex part of its territory since Moscow strengthened diplomatic and economic ties to the area last month.

Saakashvili said Europe had abandoned Georgia to the Soviet Union once in 1921 and he "hoped that Europe will not repeat this mistake."

"It is not only a question for Georgia, but for the future of Europe as well," he said. 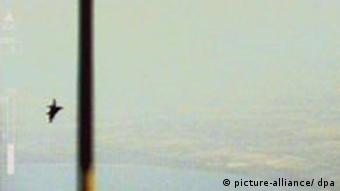 The United States and the EU have become increasingly embroiled in Georgia and Russia's dispute as the two found a platform in NATO in which to trade mutual accusations of troop increases.

Saakashvili warned on Thursday that the situation was "very close" to war, but assured EU leaders on Monday that he was intent on brokering a peaceful solution.

But the comments on Monday were overshadowed as Abkhaz rebels claimed to have shot two more Georgian spy planes. The drones would be the sixth shot down over Abkhazia in recent weeks.

Tbilisi meanwhile denied that any of its spy planes had been shot down on Monday.

The latest Russo-Georgian military accusations first exploded when Tbilisi attributed the loss of its first spy plane to the work of a Russian fighter jet.

Moscow denied involvement and said the flights broke UN a ceasefire that ended the civil war in 1994.

Relations have reached a standoff since Russia's subsequent declaration that it would increase peacekeeping troops in the region and was ready to intervene to protect Abkhaz citizen's, most of whom hold Russian passports.

EU president Slovenia warned Saturday, May 10, it could skip a five-nation foreign ministers' mission to Georgia that aims to cool tensions with Russia, unless Lithuania drops its veto on separate EU-Russia talks. (10.05.2008)

Georgia Talks of War as Tensions with Russia Escalate

President Mikhail Saakashvili said Thursday, May 8, that Georgia had come "very close" to war with Russia and the "threat remained" for a breakout over its breakaway region of Abkhazia. (08.05.2008)

Residents of the rebel Black Sea region of Abkhazia welcomed the arrival of extra Russian troops on Thursday, May 1, as a guarantee of their self-declared independence from former Soviet Georgia. (02.05.2008)

Is the EU doing the right thing by backing Georgia in its dispute with Russia? Send us an e-mail. Please include your name and country in your reply.