The worsening situation in the Middle East has captured the world's attention, including the European Union's, which has accused Israel of "disproportionate use of force" in Lebanon. Violence continued into Friday. 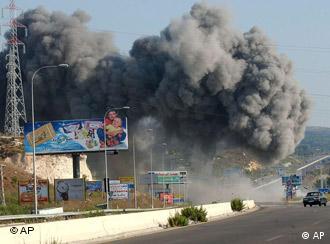 An Israeli air raid targeted a bridge in southern Lebanon

Israel broadened its offensive on Lebanon on Friday, with fighter bombers striking the airport and residential buildings in the southern suburbs of the capital, as well as blasting fuel storage tanks and cutting off the main highway to Syria. Three people were killed and 55 wounded in the air strikes, police said. Beirut airport officials said one of their three runways was hit by an Israeli missile on Friday morning.

The escalating crossborder violence -- the worst in a decade -- has also sparked a strong response from the EU. The European Union's top humanitarian aid official has called on Israeli and Palestinian authorities to make sure humanitarian agencies can still do their work in the areas affected by the recent conflict. 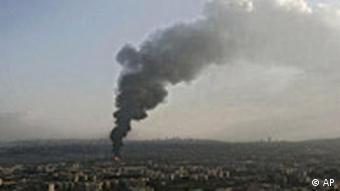 The 25-nation EU also approved an additional 50 million euros ($63 million) in humanitarian aid to meet the needs of the Palestinians in the West Bank and Gaza.

"Once again, civilians are paying the price of conflict," said EU Commissioner Louis Michel. "They are the main casualties of the Israeli blockades and incursions in Gaza, and now in Lebanon," he said.

German government: "Israel has a right to defend itself"

The German government on Friday said Israel had the right to defend itself but should think about the long-term impact of its offensive in Lebanon.

"On the one hand, Israel has the internationally recognized right to self defense. But at the same time we ask our Israeli friends and partners not to lose sight of the long-term consequences when they exercise this right," deputy government spokesman Jens Plötner said.

"Here we think care should be taken about the situation in Lebanon, which is a fragile entity as a state and could be further destabilised," he added.

Plötner said Berlin regretted the high number of civilian casualties the fighting has claimed on both sides and called on all parties to "break the spiral of violence."

"Humanitarian aid difficult to get through"

By Friday morning the death toll had reached 61 ever since Israel began retaliating Wednesday for the capture of two Israeli soldiers by Hezbollah guerrillas in a raid across the southern Lebanese border.

"Movement restrictions are also making it very difficult for humanitarian operators to help the people that most need it. I strongly urge both Israeli and Palestinian authorities to facilitate the work of the humanitarian agencies and ensure the protection of civilians," Michel said.

On Thursday, the Finnish presidency of the European Union said the use of force by Israel in Lebanon in response to attacks by the Lebanese-based Hezbollah militia was "disproportionate."

"Actions which are contrary to international humanitarian law can only aggravate the vicious circle of violence and retribution and cannot serve anyone's legitimate security interests," the EU presidency said in a statement.

At the same time, the EU said it urged Hezbollah to release two Israeli soldiers it had captured "immediately and unconditionally, and to cease all attacks on Israel." 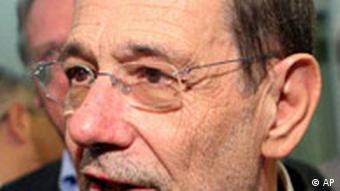 France has adopted a particularly sharp tone publicly regarding the Israeli retaliation. Foreign Minister Philippe Douste-Blazy said: "This is a disproportionate act of war with very negative consequences for Lebanon, especially because it runs the risk of sparking even more violence which could destabilize the whole region."

German Chancellor and US President agree

Like the German chancellor, US President George W. Bush also said Israel has the right to defend itself, but should not weaken the Lebanese government.

The Beirut government, too divided to disarm the Shi'ite faction that effectively controls south Lebanon, has urged the UN Security Council to call on Israel to halt its onslaught when the top world body meets later on Friday.

Meeting in Germany for an informal visit, both German Chancellor Merkel and US President Bush have called for restraint as violence erupted on the Israel-Lebanon border following the kidnapping of Israeli soldiers. (July 13, 2006)

US President Bush and German Chancellor Merkel on Thursday called for restraint in the Middle East, UN action on Iran, and urged Russia to stick with democratic reforms. (July 13, 2006)

Europe Gets in Step With US Policies in the Middle East

In 2003, most European nations were at odds with the US over its invasion plans for Iraq. Now, with a new set of challenges in the Middle East, Europe is increasingly aligned with Washington on the Hamas and Iran issues. (Feb. 18, 2006)