EU Industry Commissioner Günter Verheugen told a German newspaper that his job is a constant bureaucratic power struggle. But President Barroso defended the process of change he said was underway. 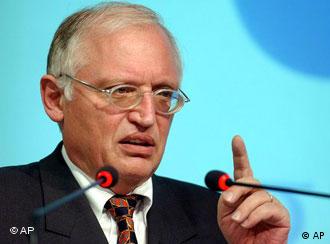 "Developments in the past decade have given officials so much power that the most important political task of the 25 commissioners is to control the (bureaucratic) apparatus. And sometimes control over the apparatus is lost," the German said in an interview with Thursday's edition of the Süddeutsche Zeitung daily.

"Many officials think, 'the commissioner is only there for five years and is only a tenant, but I am here to stay'," said Verheugen, who is also the vice-president of the European Commission, the decision-making body of the EU.

Commission President Jose Manuel Barroso responded to Verheugen's comments with an appearance before the commission's 20,000 administrators.

He called Verheugen's statement "proof that he didn't have the patience to further the process of change and clear hindrances out of the way," reported German news agency DPA. 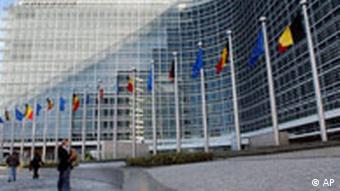 The European Commission is based in Brussels

Verheugen said the commissioners have to make sure that important issues are resolved during their weekly meetings -- otherwise the civil servants would make the decisions for them.

"My theory is that too much is decided by officials," he said.

He also blamed the power of officials for the excessive red tape in the European Union and called reports written by EU officials "technical, arrogant and condescending."

The solution, according to Verheugen, is not "regaining political power," but establishing a new political culture in which the commissioners have authority of matters of finance, personnel and organization.

The commissioner said he sees particular need for "radical change" in construction, the automobile industry, the engineering sector, waste management and agriculture and predicted that firms in these areas could save at least 75 billion euros ($95 million) if bureaucracy were reduced.

The European Commission has sounded an alarm against protectionism within the European Union and vowed to defend competition in the 25-nation bloc. (16.03.2006)

Brussels is aflame as lobbyists do their best to influence EU lawmakers to vote their way on controversial services legislation in mid-February. (04.02.2006)

The EU and the United States could be on collision course after the European Commission revealed that interior ministers will debate reintroducing visa controls for US diplomats in response to strict stateside criteria. (05.10.2006)