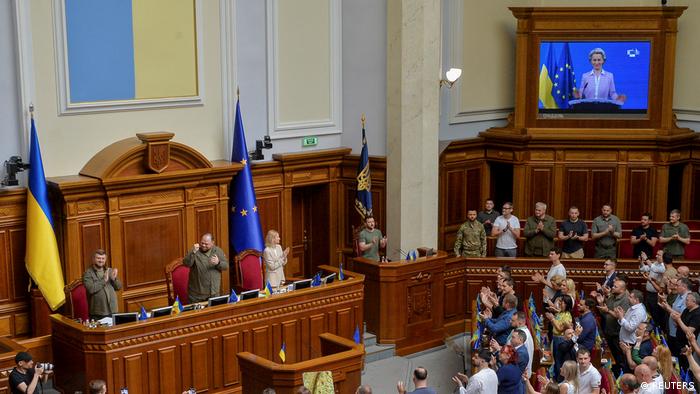 European Commission President Ursula von der Leyen on Friday told Ukraine's parliament that while the country was firmly on the path toward EU membership, there is still some way to go before accession into the bloc.

In a video address to the Rada, the EU chief said that Ukraine had a "very clear European perspective" and said "the next steps are within your reach, but they will require hard work."

Von der Leyen highlighted the progress Ukraine had made, noting that Kyiv had filed its application for EU membership just days after Russia's invasion and had managed to provide the necessary information "in record time."

She told the parliament that the international community was mobilizing to support efforts to rebuild Ukraine and said the process was closely linked to the country's bid for EU membership.

"Your European path and the reconstruction of the country will go hand in hand," von der Leyen said, and pointed toward the "massive investments" that would be required to rebuild Ukraine.

"To maximize their impact and to foster business confidence, investments will have to be coupled with a new wave of reforms."

The EU chief said Ukraine has made progress in its reform agenda and "created an impressive anti-corruption machine," but added that now, "These institutions need teeth."

The right people in the right places

Von der Leyen called for the appointment of the right people in senior positions.

"The new head of the Specialized Anti-Corruption Prosecutor's Office and the new director of the National Anti-Corruption Bureau of Ukraine should be appointed as soon as possible," she said.

Von der Leyen praised the country for being the only EU partner in eastern Europe "to have adopted a law to break the oligarchs' grip on your economic and political life."

But she added: "Now you have to focus on the implementation of this law in a legally sound manner."

EU member states accepted Ukraine as an EU candidate just over a week ago in what Ukrainian President Volodymyr Zelenskyy described as a "unique and historic moment."

The process could still take a number of years, as seen in the case of Turkey, where a report adopted by the European Parliament pointed out that Ankara had consistently reneged on commitments in relation to the accession process.

Zelenskyy said in his address to parliament that "A new chapter of history for the European Union and Ukraine has started," but said the process of getting into the EU needed to be swift.

"We made a journey of 115 days to candidate status and our journey to membership shouldn't take decades. We should make it down this road quickly," Zelenskyy told lawmakers.