EU Calls for Peaceful Transition in Guinea After Leader′s Death | Europe| News and current affairs from around the continent | DW | 23.12.2008

EU Calls for Peaceful Transition in Guinea After Leader's Death

The European Union has called on Guinea’s military and government to ensure a peaceful leadership transition after the death of the West African nation’s long-term leader sparked reports of a military coup Tuesday. 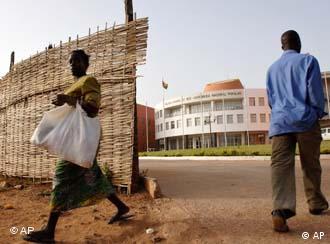 A view of the parliament building in Guinea

A military radio statement within hours of the death of President Lansana Conte said that both the government and the constitution had been suspended.

Army Captain Moussa Dadis Camara said a council of civilian and military leaders would be set up to replace the government as state institutions were "incapable of resolving the crises which have been confronting the country," the BBC reported.

"In the next few days, a transitional consultative council will be set up made up of soldiers and civilians taking account of ethnic balance. It will be led by a president," Camara said.

But Guinean Prime Minister Ahmed Tidiane Souare later dispelled those claims, saying the government and state institutions had not been dissolved and that plans were being made for Conte's funeral.

"I do not know these people who have spoken. We are trying to settle this question of national importance," he said. "I am sure that they will see reason. They have not used force. There has been no threat against anybody."

Souare said on Radio France Internationale that most soldiers in the Guinean military remained loyal to the country's constitution and asked them to resist any attempted coup.

The circumstances surrounding Conte's death are not yet available, but he was known to suffer from diabetes and was a heavy smoker. Conjecture surrounded his exact date of birth, but he was believed to have been 74 when he died. 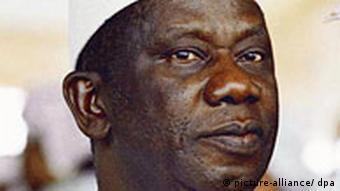 President Lansana Conte of Guinea had seized power in 1984

A spokesman for the French Foreign Ministry said the EU was keeping up with developments in Guinea and urged all European residents to remain in their homes until the situation deescalated.

The EU called on political and army leaders to "respect constitutional measures to ensure a peaceful transition" of power through elections.

National Assembly President Aboubacar Sompare announced Conte's death on state television in the early hours of Tuesday, asking Guinea's Supreme Court to officially declare the presidency vacant so a presidential election could be held within 60 days, as stipulated in the country's constitution.

Sompare was expected to be named interim president in line with the constitution, despite the army's announcement that it would hand-pick a military president in the coming days.

The streets of the capital Conakry were said to be quiet with no visible troop presence following reports of Conte's death and possible coup.

Conte seized control of Guinea in a bloodless coup in 1984 and maintained a tight grip on the nation through three controversial elections until his death late Monday, Dec. 22.

In recent years, the nation has seen a military mutiny, anti-government riots and strikes over the rising cost of food and fuel.

Conte did not groom a successor and his death prompted fears that the military would make a move to fill the power vacuum.

Rumours that his health had deteriorated had been circulating since last week, but officials had denied the reports.

Fishermen in Guinea are Finding it Harder to Survive

Many people along the West Coast of Africa depend on fishing as their main source of income. In Guinea, one third of the population lives on the sea. (20.04.2008)

In an apparent bid to end calls for international intervention against his regime, Zimbabwean President Robert Mugabe has claimed that the cholera epidemic that has killed nearly 800 people since August is over. (12.12.2008)