The European Parliament has named two Iranians the winners of the Sakharov freedom prize. The filmmaker and human rights lawyer take their place among previous laureates, including Nelson Mandela and Aung Sang Suu Kyi. 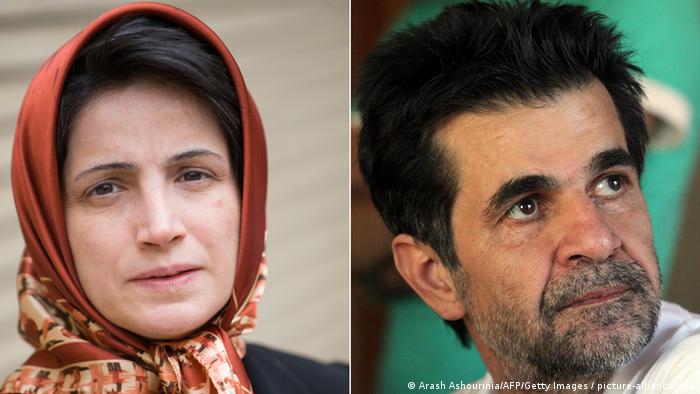 After selecting five nominees, then narrowing the list down to three, the European Union announced the winners of 2012 of the Sakharov Prize for Freedom of Thought. The European Parliament's official website revealed around midday on Friday that the Iranian filmmaker Jafar Panahi and human rights lawyer Nasrin Soutoudeh were this year's recipients.

Both Panahi and Soutoudeh have garnered attention for their work in Iran. The first has become known as an influential filmmaker, winning the Camera d'Or at the 1995 Cannes Film Festival. "This Is Not a Film" was smuggled out of Iran to the Cannes Film Festival via a USB drive baked into a cake. Panahi is currently banned from making films and faces a six-year sentence.

"[Panahi's] films bear witness to day-to-day reality in Iran; for us he embodies the fight against official repression and fight for freedom ad human rights", said Member of the European Parliament Véronique de Keyser in her recommendation for the nomination.

Soutoudeh is currently serving a prison sentence. Following the disputed presidential elections in Iran in 2009, the rights lawyer worked with opposition activists who had been jailed.

"It is high time that Sakharov prize went to Iranians," said MEP Marietje Schaake in her nomination of the lawyer. "Ms. Sotoudeh is an excellent candidate; a human rights lawyer who has defended juveniles, women and prisoners of concience, but is now in prison herself."

Panahi and Soutoudeh are to receive 50,000 euros ($64,500) as part of the prize. The formal award ceremony is scheduled to take place in Strasbourg, France on December 12.

The European Parliament has been awarding the Sakharov Prize since 1988 to individuals who have contributed to the fight for human rights and democracy around the globe.

Andrei Sakharov (1921-89), whose name the award bears, was a Russian nuclear theoretical physicist. Prompted by his involvement in the development of the thermonuclear bomb, the prominent physicist became vocal during the late 1960s about issues such as the social responsibility of scientists and arms. Sakharov received the Nobel Peace Prize in 1975 for his social activism in the former Soviet Union. The Soviet government placed Sakharov in internal exile in the city of Gorky, which was off limits for foreigners in 1980. There he remained until 1986.