Ethnic minorities marginalized in German media | Germany | News and in-depth reporting from Berlin and beyond | DW | 18.08.2014

Ever since the shooting death of Michael Brown, the racism debate has dominated the US media. But German media also often perpetuate stereotypes of ethnic minorities, instead of breaking down prejudices. 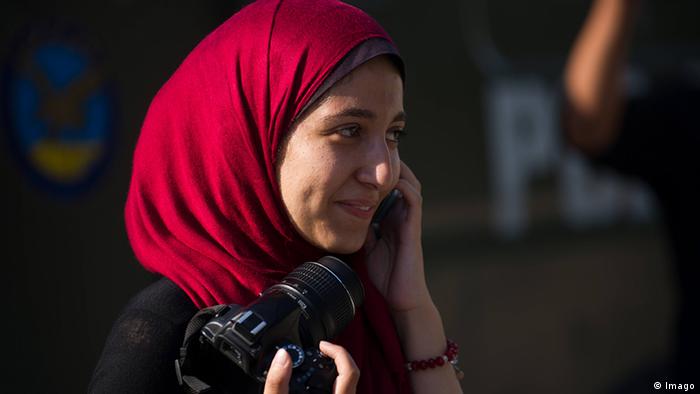 Since the shooting death of Michael Brown, an unarmed African-American teenager, at the hands of a white police officer just over a week ago, demonstrations and riots have rocked the small town of Ferguson, Missouri. And discussion of a hot-button issue that has been a part of the US ever since its inception has dominated the news: Racism, and even how it has influenced the reporting of the incident itself.

The discussion was kicked off by people like Tyler Atkins, another young African American who took to Twitter to react to how Michael Brown has been portrayed in the media, as if he had been flashing a gang sign.

Atkins posted two side-by-side photos of himself to Twitter. In one, the 17-year-old can be seen wearing a black T-shirt with a blue bandana tied around his head, pointing at the camera; the other shows him as a serious young man dressed in a black suit and bowtie, a saxophone slung around his neck.

Accompanied by the hashtag #IfTheyGunnedMeDown, the post - and thousands like it - asks how the media would choose to portray Atkins if he were the next shooting victim.

These photos have highlighted how the media create and reinforce stereotypes. As one university student points out in a "New York Times" article, taken out of context these photos are often used to "portray [victims] as if they deserved it, cops versus robbers, good guys versus bad guys."

And the stereotyping is not just limited to black victims. As reported by "The Huffington Post," Twitter user LordSVWP pointed out that black victims are often portrayed in a worse light than whites suspected of crimes like murder.

While some headlines "seem to suggest that black victims are to blame for their own deaths," articles about white murder suspects may "appear to go out of their way to boost the suspect's character" and even cast them "in a positive light." The Huffington Post article goes on to provide a lengthy list of recent examples.

Tahir Della knows how powerful such images can be. Della is a member of the Initiative of Black People in Germany, a group that tries to raise public awareness of racial stereotypes in newspapers, television and on the Internet.

"Black people are still often associated with drug-related crime and illegal migration, and the media reinforce these associations," said Della, speaking with DW. When journalists report on refugees, their stories are often illustrated almost exclusively with images of black people from Africa.

And yet, Della pointed out, most refugees entering Germany don't come from Africa - it's just that blacks fit the image that most Germans have when they think of refugees. 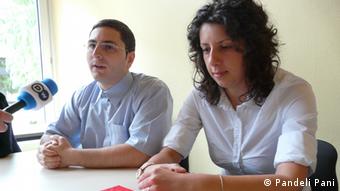 Immigrants from Romania are rarely shown to be doctors, like these two

Konstantina Vassiliou-Enz, a radio journalist with the New German Media Makers association, also campaigns against stigmatizing images and phrases in German media. She warns her colleagues, for example, against making false correlations when they mention a person's origin, when such a detail is irrelevant to the story.

"This is particularly evident in crime reporting," she told DW. "In those stories, offenders who are not German or new immigrants are often identified with their ethnic background. So it's not just Ahmed H. from Cologne, but Ahmed H., a Turkish man from Cologne."

Mentioning the identifier "Turkish" gives it an apparent meaning, according to Vassiliou-Enz. The named individual will automatically be considered to be a typical representative of the group, she said, and that will shape any further thoughts of the group.

When people read a newspaper report on a street gang of young men with an immigrant background, they're unlikely to think of the Greek family next door, the Turkish parents that volunteer at school or the Nigerian doctor giving them a checkup. But it's precisely these people that represent the "normal immigrants" - not the extreme case of the street gang.

Vassiliou-Enz believes that many of these stereotypes could be avoided if journalists were made aware of the problem. She gives an example: Almost every article on integration show pictures of women wearing headscarves. But in order to make a clear visual statement, Vassiliou-Enz said that editors needn't resort to the extreme and show a fully veiled Muslim woman loaded down with shopping bags and pushing a stroller.

"If there must be a headscarf, because it has such a symbolic power, then why not show a Muslim woman buying bread at the bakery, or walking downtown with a cell phone pressed to her ear?" she said, adding that such images would be far more effective at reflecting reality.

Stories reporting on migrants from Romania and Bulgaria are also quite one-sided and reductive - both text and images, according to Vassiliou-Enz. Immigration figures have been greatly exaggerated, especially in reports from the last year, and images accompanying the articles have overwhelmingly shown apartments that are cluttered and completely rundown . 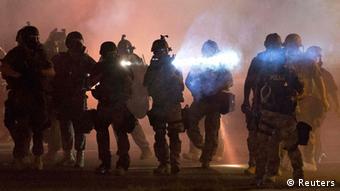 The streets in Ferguson have resembled a warzone

"Images of people who came from Bulgaria to work here as a doctor are never shown, even though this is the population that makes up most of the immigrants," she pointed out. "Entire graduating classes of Romanian and Bulgarian physicians have come to Germany."

Vassiliou-Enz believes the best way to tackle such prejudice is through dogged, precise research, a professional principle that should be applied equally to every subject and ethnic group.

Meanwhile, in the current US media coverage of Michael Brown's death, his photo is almost nowhere to be seen. Media reports are dominated by the images of burning suburban streets and a militarized police force - a visual language that suggests war rather than the tragic death of an unarmed young man shot by a police officer.

The US attorney general has called for a federal autopsy of the body of Michael Brown. Eric Holder’s request comes after another long night during which riot police quelled protests with heavy weapons and armored cars. (17.08.2014)