Estonians Say “Jah” to the EU

Estonians voted overwhelmingly in favor of joining the European Union in a referendum Sunday with results showing the “yes” camp grabbing 63 percent of the vote. 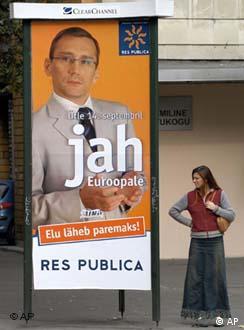 The "yes" vote is the winner.

After Sunday's historic vote on whether or not the ex-Soviet state should break with its cherished independence and join the 15-nation European Union next year, Estonians woke up on Monday to find themselves suddenly feeling very European.

With 63 percent of the population voting in favor of membership in the new bloc and 37 percent against it, the country overwhelmingly decided to embrace Europe as its future. "Europe, here we are!" the country's biggest daily SL Ohtuleht splashed across its front page.

One of the smallest and economically strongest candidate countries slated to join the bloc on May 1, 2004, Estonia emphatically repudiated fears the country’s dynamic and liberal economy would get mired in EU red tape if it joined the union.

"A 'yes' in today's vote will finalize a process that started 15 years ago -- our aspiration to join Europe in economic, political and cultural terms," Economy Minister Meelis Atonen told Reuters, referring to the freedom movement of the late 1980s.

Estonia is the second to last of eight eastern European countries to hold an EU referendum to join the bloc when it expands from 15 members to 25 next May. It's neighbor Latvia goes to the polls in five days.

Estonia went through a complete change when the Soviet Union collapsed and it gained independence in 1991. The communist designed planned economy became a thing of the past and the smallest of the three Baltic states quickly developed into a free market economy and a modern democracy.

Economic growth is around 6 percent, inflation at just 3 percent and unemployment has been brought down to around 9 percent, proving that the country's economic policies pave the way for a successive entry into the EU.

Both supporters and opponents of EU membership employed economic arguments to back up their positions. Proponents believed EU membership would fuel further growth and create new jobs, but critics believed it could slow the country's climb considering the recent economic troubles in larger EU countries like Germany and France.

Just as in Latvia and Lithuania, EU opponents contended the country shouldn't go from one union, the Soviet Union, into the European Union.

But others, like Estonian Prime Minister Juhan Parts, believe EU membership is crucial to the small country's future.

"Joining the EU will finalize Estonia's incorporation into Europe and will help us secure continuity of the Estonian state and democracy," Parts told the news agency Reuters ahead of the vote.

Along with Estonia, nine other countries have satisfied enough European Union criteria to be seriously considered for membership. Read DW-World's prize-winning dossier on the expanding EU.

For Estonia, EU Membership Isn't the only Identity Crisis

For Estonia and its Russian minority, the upcoming vote on EU membership is the latest stop on a long road of intercultural conflict. But right now, all ethnic groups are facing hardships. (Sept. 9, 2003)