Rebel forces attacked the city Bangassou a day before results of a contested presidential election are to be announced. UN forces are backing the government and fighting to secure hot zones. 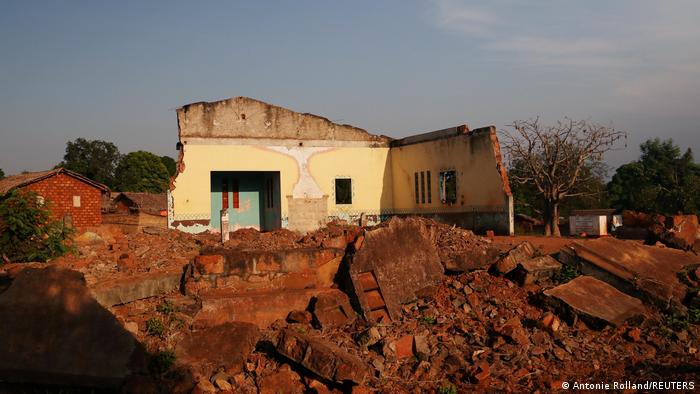 Rebel groups attempted to take hold of the city of Bangassou in the Central African Republic on Sunday, ahead of presidental election results being announced.

It said its peacekeepers had been protecting the city, and that the bodies of five fighters had been found. Two army soldiers were wounded.

The head of MINUSCA's Bangassou office, Rosevel Pierre Louis, told the AFP news agency that the diamond-mining town had been under attack since 5:25 a.m. (0425 GMT) and that since then, the "rebels control the town...they are everywhere."

Louis added that government troops had abandoned their stations and "are [now] at our base." Bangassou's Bishop Aguirre confirmed that the clashes had started from 5 a.m., saying "there are gunshots and detonations around the city centre."

The latest rebel offensive began after the constitutional court rejected Bozize's candidacy to challenge Touadera in polls that took place on December 27, 2020.

The former leader denied involvement in the uprising, although suggestions of collusion have reportedly come from within his own party.

The fighters moved in before presidential election results were due to be announced on Monday. The insurgents have been kept away from the capital Bangui by federal soldiers, UN peacekeepers and reinforcements sent from Russia and Rwanda.

Bangassou, which sits on the border with the Democratic Republic of Congo, is about 750 kilometers (470 miles) from the capital.

The attack came a day after armed groups waged a dawn assault on the town of Damara, around 70 kilometers (45 miles) north of the capital Bangui.

MINUSCA spokesman Vladimir Monteiro told AFP of the "incursion" in Damara on Saturday, but Central African soldiers had "intervened and the armed groups fled."

He told AFP that the UN force, which has 11,500 peacekeeping troops in the country, had also sent patrols to the town.

MINUSCA has not yet provided details on the number of dead and wounded in either the Bangassou or Damara attacks.

Touadera is tipped to have won the December 27 polls, but opposition groups have called for the vote to be annulled in part because voting only took place in a fraction of the country.

The definitive results from the first round are not expected before January 18, and, if there is no outright winner, a runoff will be held on February 14.

Since the Central African Republic gained independence from France in 1960, the country has been one of the most volatile, coup-prone countries in the world, as well as one of the poorest.

Airports in several West and Central African countries have been affected as air traffic controllers held a strike to demand improved working conditions. The strike was expected to last until Sunday.