El Salvador's top court has declared the country's street gangs to be terrorist organizations. The move comes after 14 gang members were killed inside a prison this past weekend. 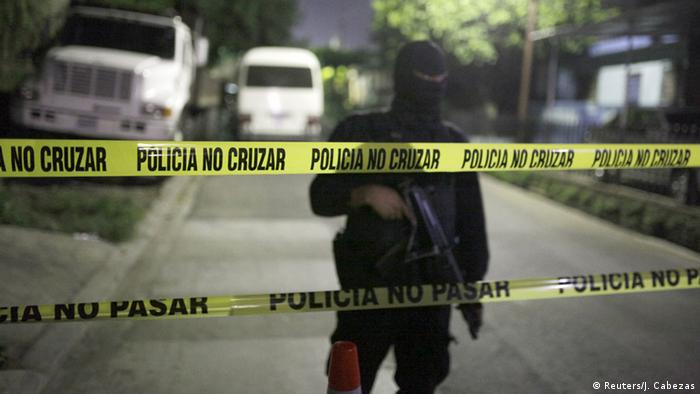 El Salvador's supreme court declared the nation's street gangs as well their financial backers to be terrorist groups on Monday.

The court said that the Mara Salvatrucha or MS-13 gang and any other gang that seeks to claim powers that belong to the state would be deemed terrorists. It defined terrorism as the organized, systematic use of violence.

The declaration came on the same day that El Salvador's attorney general said an order to kill gang members in a prison this past weekend came from inside another prison.

Luis Martinez announced Monday that the recent slaughter of 14 gang members inside the Quezaltepeque prison in western El Salvador came from the San Francisco Gotera prison in the country's east.

The gang members, who were part of the Barrio 18 gang, were all strangled or stabbed to death as part of an internal purge, according to authorities. Martinez said that authorities had advance information that a mass killing was coming, but did not knew where or when.

El Salvador has one of the highest murder rates in the world and the level of violence has increased in the country over the past year with the breakdown of a truce between the Barrio 18 gang and its rival, MS-13. The gangs came to prominence in the 1980s in Los Angeles' Latino neighborhoods.

At least 125 people were murdered in the country in just three days last week, according to police.

Government statistics show at least 3,840 people have been killed so far this year in the country of 6.4 million people. President Sanchez Ceren has tried to crack down on criminal gangs since coming to power last year.

The violent gang MS-13 has backed up claims of a years-long pact with the government, according to Salvadoran media. They said a recent killing spree was revenge for the deal being broken.

El Salvador's president is waging war on gang violence. But human rights advocates tell DW that waves of mass arrests in the Central American country have swept innocent people into a violent, and deadly, prison system.

President Nayib Bukele has imposed a state of emergency for 30 days as El Salvador grapples with a sudden increase in slayings. Could an alleged soured pact between the government and notorious gangs be the reason?