An Egyptian TV station has suspended the airing of the weekly satirical show "El-Bernameg." The news has come one week after host Bassem Youssef mocked the country's new military-backed rulers. 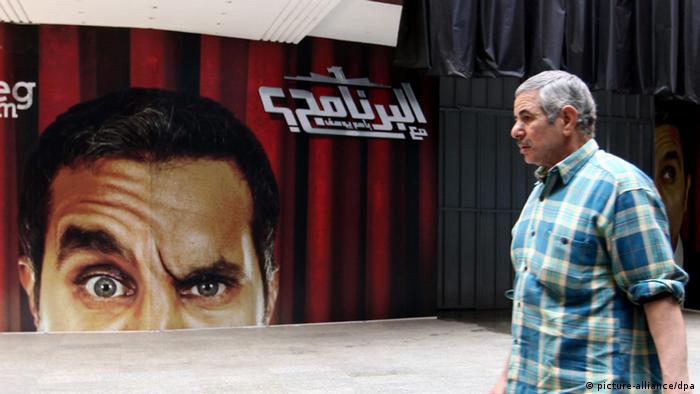 The privately owned Egyptian CBC channel said it would not air host Bassem Youssef's program “El-Bernameg,” which means “The Program” in Arabic, because the satirist and his producer violated the network's editorial policies.

A broadcaster read a statement issued by the station's board of directors that said the channel had decided to suspend the show until editorial and commercial disputes with Youssef were resolved.

The pre-recorded weekly program returned to air on October 25 after a hiatus of over three months. It was the first episode to air since the July 3 ouster of democratically elected Islamist president Mohammed Morsi by the military. Last week, Youssef mocked the military fever now gripping Egypt and also poked fun at military chief Gen. Abdel-Fattah el-Sissi.

The episode angered many people, with military supporters filing complaints against the show.

Referring to the ruler of the country, Youssef later displayed a projected image of Sissi before quickly swapping it with the image of the interim president, Adly Mansour.

Youssef frequently made jokes aimed at Morsi during his time in office, which resulted in the host being detained and questioned over allegations that he defamed Islam and the president. He was later released on bail.

Youssef, a heart surgeon, rose to fame with a satirical online show after the January 2011 uprising that ousted longtime ruler Hosni Mubarak. His show has been compared to the popular US satirical show "The Daily Show with Jon Stewart."

The suspension of the show is likely to raise further questions about the new government's commitment to freedom in its political transition.