Journalist and Social Democratic politician Egon Bahr is considered the architect of “Ostpolitik,” West Germany’s policies toward the Soviet Union and eastern Europe, starting in the 1960s. 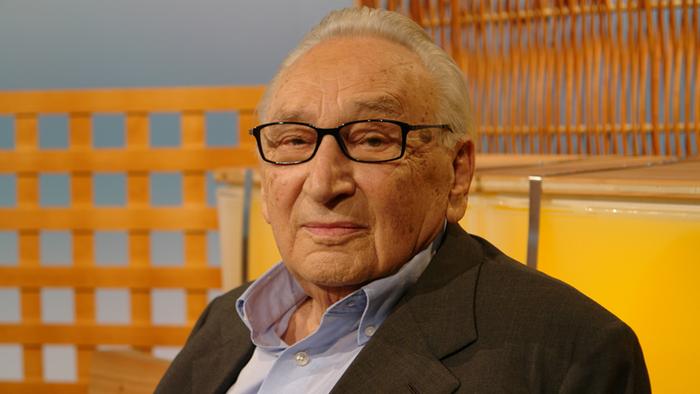 His formula of change through rapprochement created the basis for them. On Talking Germany, the 91-year-old talks about his efforts to make the Berlin Wall slightly more penetrable during the Cold War, his friendship with Willy Brandt and meeting Kennedy in Berlin in 1963.

Egon Karl-Heinz Bahr was born on March 18, 1922 in Treffurt, in Thüringen, the only son of a teacher and a bank clerk. The family moved from Torgau in Saxony to Berlin in 1938, after his father had been dismissed from his teaching position because he refused to divorce his wife, whose mother was Jewish. Despite that, Bahr served in the military from 1942-1944. He was dismissed in 1944 as unfit for service because of his Jewish grandmother, and until 1954 he was conscripted to work at Rheinmetall-Borsig, which produced weapons. He had actually originally wanted to become a musician, but that was considered an unprofitable artistic profession. So after the end of the war he worked first as a journalist, among other things, reporting for the Berliner Zeitung newspaper, and later as an editor-in-chief at the West Berlin radio station RIAS (Radio in the American Sector). Egon Bahr joined the Social Democrat Party in 1956. In 1960, Willy Brandt, at the time mayor of West Berlin, appointed him to head the city’s Press and Information Office. In this capacity he was witness to US President John F. Kennedy’s visit to Berlin and his famous words, “Ich bin ein Berliner.” After Brandt was elected West German chancellor in 1969, Bahr became state secretary in the chancellor’s office and in late October federal commissioner for Berlin. After the 1972 elections, Brandt appointed him to the cabinet as minister for special affairs, which meant he was a regular advisor on all issues involving foreign and security policies. During his professional life he has also been the SPD’s party whip and after 1984, he headed the Institute for Peace Research and Security PolicyInstitute at the University of Hamburg. Egon Bahr lives in Berlin with his third wife. He has three children.