The move comes after Vice President Jorge Glas had delivered a written critique of President Lenin Moreno. Since the vice president is elected by popular vote, the president cannot sack him. 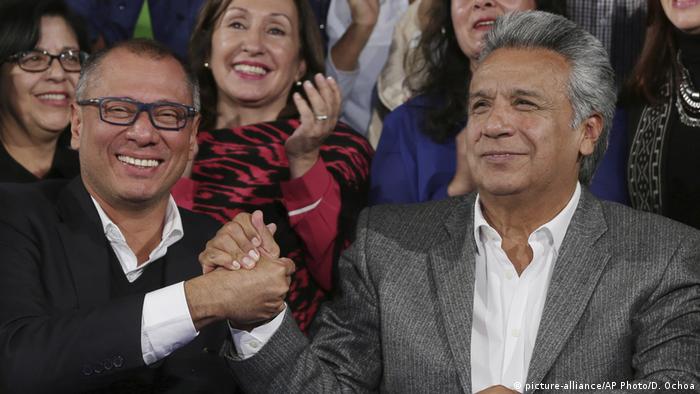 President Moreno (pictured right) on Thursday signed a decree stripping his Vice President Jorge Glas (L) of all the tasks the latter had been empowered to oversee since both leaders took office this past May, after contested elections held the previous month.

While Moreno does not have the power to kick Glas out of office, Ecuador's National Assembly could remove the vice president through a trial. The legislative body has ruled out such a proceeding.

In his decree, Moreno stated that both loyalty and political commitment to the "Citizen Revolution" - a left-wing political movement spearheaded by Moreno's predecessor Rafael Correa - mean serving the nation with unity, something "which has not been duly (carried out) by the vice president."

In response, Glas vowed to stay on as vice president. "Despite the removal of my official functions, I continue to be the vice president of all Ecuadorians. I will continue to work alongside my nation's poor," he said at a press conference. He added that the current situation was "a clear political retaliation" for having acted in accordance with his conscious.

Without naming Moreno, Glas described the president as "a person who has continually attacked our revolutionary project."

Read more: Ecuador: The end of the 'Citizens' Revolution'?

The president's move came one day after Glas published a critique of Moreno, accusing him of having relinquished state media control to private hands and betraying the trust of the "Citizen Revolution."

Moreno's decree and Glas' response broadens a rift between the two leaders and mirrors a similar division within the Country Alliance party to which both politicians belong.

Moreno and Glas served together under Correa, but their once-solid political alliance has turned hostile. Each has accused the other of betraying their accountability to the Ecuadorian people.

Glas has faced corruption accusations from the Ecuadorian opposition, including alleged links to the Odebrecht graft scandal that has seen political leaders throughout the region challenged by accusations of bribery and illegal payments.

Prior to Glas' letter, Brazil's O Globo published a recording in which an Odebrecht executive and an Ecuadorian official talk about Glas' alleged requests for money in exchange for state contracts awarded under Correa. The vice president has denied wrongdoing.

The Brazilian construction firm has admitted paying $33.5 million in bribes to Ecuadorean officials for public contracts.