Ecuadorian President Guillermo Lasso is under fire for increasing the price of gas even as unions and other groups have called for lower rates and an exemption for sectors hit hard by the COVID pandemic. Thousands of protesters took to the streets of Ecuadorian cities on Tuesday, setting up roadblocks and clashing with police to demonstrate against President Guillermo Lasso's economic policies.

The demonstrations come days after the conservative leader decided to raise gasoline prices.

Last week, Lasso had scrapped plans to enforce an incremental overall hike in gasoline prices in response to pressure by indigenous groups and other organizations.

Instead, Lasso opted to increase the price of high-octane gasoline to a fixed $2.55 a gallon and diesel to $1.90 a gallon. High-octane "gasoline extra" is Ecuador’s most-used fuel.

Unions and other groups have called for lower fuel prices and an exemption for sectors hit hard by COVID. 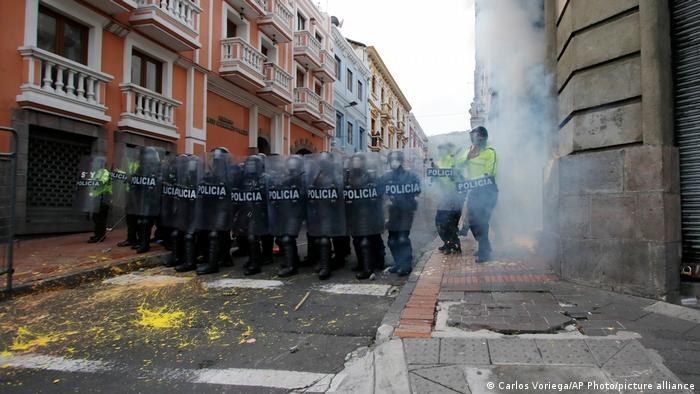 Heavy police deployment in Quito, Ecuador as the government tries to contain protests

"We have collectively taken this decision [to demonstrate] in the face of the new economic measures that are increasingly crushing our populations, our transport workers and our communities," protest organizer Julio Cesar Pilalumbo told AFP news agency at a roadblock in Zumbahua in central Ecuador.

As protesters took to the streets, traffic was disrupted in five of Ecuador's 24 provinces.

The government deployed police and soldiers and warned that it would move to "prevent the closure of roads" to passengers and goods.

"We don't agree that the measures implemented because of the crisis should fall on workers and the middle class," a 55-year-old university professor told Reuters news agency, as he joined a march of around 1,000 people in the capital, Quito.

Police launched tear gas canisters at at least one location to control crowds. Authorities said at least 37 people were arrested.

Last week, Lasso declared a 60-day state of emergency to tackle rising crime and violence blamed on drug traffickers in the country.