In times of economic crisis, money for culture is drying up. European arts institutions are feeling the drought, but will private funding save the day? 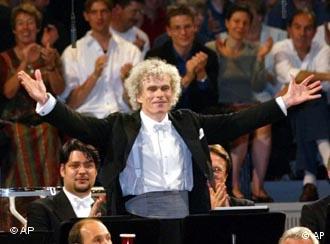 The Berlin Philharmonic, directed by Sir Simon Rattle (shown here), has turned itself into a public foundation, helping to shield it from money troubles.

It's gone from boom to bust in the arts community. The 90's -- a decade of almost unprecedented prosperity -- saw a huge rise in arts funding the world over, with many a city and state budget devoting millions to the building of new concert halls and museums (designed by pricey big-name architects like Frank Gehry). But as corporate profits start hitting the skids and unemployment skyrockets, incredible-shrinking federal and state budgets are spoiling the convivial atmosphere.

Arts institutions are under pressure. Where's the money for cultural funding going to come from at a time when politicians are talking about slashing meat and potato benefits like health-care? As politicians in Germany -- and Europe -- struggle to find solutions to the budgetary crisis, they are turning their attention to private arts funding.

Continental European cultural institutions have long been the benefactors of generous government support (either federal, state, or both) -- unlike their counterparts in Great Britain and the United States. But with less money to go around, will that continue to be the case?

The situation in Germany: the Federal Government to the Rescue?

Don't count on it. Because of Germany's federal structure, competencies are divided up between federal and state governments, with the latter responsible for culture (that's why there's no federal minister for culture in Germany). State governments decide who -- which museum, theater, orchestra -- gets money and how much. It's no secret that state and local jurisdictions are in trouble -- Berlin, for example, is broke -- but can arts institutions turn to the federal government to bail them out?

Not easily. A Federal Cultural Foundation was recently created, but came into conflict with the Cultural Foundation of the States, which was established over fifteen years ago. Attempts to unite the two, and thereby create one of the largest and most financially solvent cultural foundations in Europe with a budget of €46 million per year, have been plagued by prickly and, thus far, not entirely successful negotiations.

From Public to Private Funding

But while the German federal and state governments bicker, publicly-funded arts institutions throughout Europe are thinking about how to cut costs, and whether they can offset sinking public funding with more private money. They certainly don't want to raise the cost of admission and drive away the public.

Unlike the United States, where cultural institutions are used to dwindling state support (according to the National Assembly of State Arts Agencies, 42 American states cut their arts budgets last year, with state arts funding decreasing from $410 million in 2001-02 to $310 million in 2002-2003), continental Europe has enjoyed generous public funding.

But European governments are now taking a tougher stance, urging arts institutions to balance their budgets and increase profitability. This has some European culture insiders worried that they could face the same fate as their counterparts across the pond and that they may therefore be forced to aggressively seek out more private funding and corporate sponsorship. Many wonder if the American-modeled option is the right answer to the budgetary crisis.

The world-famous Milan-based Scala Opera House has for some time now -- officially -- been a semi-private foundation, though in actuality the personal costs are still covered by the state. But a 1998 change in status allowed the opera house to seek more sponsorship money, without the conflicts faced by a publicly-funded institution. Complete renovation of the historic opera house, for example, has been completely financed by the Italian tire manufacturer Pirelli.

The Scala itself is a world-wide recognized and esteemed "brand." Large firms -- so it would seem -- are eager to associate themselves with such organizations, garnering a reputation as "supporters of excellence."

The city-state of Berlin is currently €36 billion in dept, and this has no doubt taken its toll on the arts community. Recently, Berlin's culture senator Thomas Flierl announced a plan to reduce staff and jointly administer the city's three opera houses, the Staatsoper, the Deutsche Oper, and the Komische Oper. Under the plan, profitable opera houses, such as the Staatsoper, which currently has a surplus of several million, would be required to fork over excess funds to bail out other ailing institutions, instead of re-investing it in their own house. That's the danger of coming under the umbrella of cultural institutions closely overseen by the government in a cash-strapped city.

The hugely popular Berlin Philharmonic, which signed Sir Simon Rattle as its artistic director in 2001, has managed to insulate itself from such fiscally and politically motivated moves and has attained a fair degree of independence in terms of how it handles its finances. Sir Rattle made it a condition of his signing with the city, that the Berlin Philharmonic be turned into a public foundation, whereby it would become self-governing with the power to make artistic and financial decisions. This required a change to state law, which was approved in 2001.

The Philharmonic gets a guaranteed allowance from the state, which is renegotiated every few years, and currently supports the Philharmonic through 2004. Of course, administrators at the Philharmonic must make a case for this allowance, currently about €14 million per year, and may face decreased funding should times turn bad. But they have more independence and flexibility, which allows them to react better to the market and decide how to spend their funds than if they were under closer government oversight. And as a foundation, the Philharmonic is free to take money from corporate sponsors.

For other Berlin arts institutions, like the opera companies, this level of independence is enviable. "As far as I know, other institutions which are still part of the Berlin bureaucracy want to obtain this status, and there must be a certain rational for that," Dr. Helge Grünewald, the press spokesman for the Berlin Philharmonic told DW-World.

Flexibility to manage one’s finances is one thing. But should cultural institutions be so quick to turn to private and corporate funding to fill the gap left by declining government support? Not necessarily.

In Germany, sponsorship currently covers just four percent of arts funding (this is largely due to the fact that public investment is seven times higher in Germany than in, say, England). That's a lot of ground to cover with new corporate sponsorship in a country where arts administrators are not used to asking for hand-outs. For one thing, the institutions lack the personal to do so. At the London Covent Garden Opera, a department of 27 people tend to fund-raising along with an additional 54 people in the marketing department. That's more than the entire administration of the Bavarian State Opera.

And if America is any kind of example, then corporate funding is every bit as vulnerable to the ups and downs of the market as government funding. It, too, can dry up in times of crisis. In the U.S., total gifts by the nation’s top 60 donors fell from $12.7 billion in 2001 to $4.6 billion in 2002, according to a survey by the Chronicle for Philanthropy.

Rolf Bolwin, director of the German Stage Association, has no illusions that private money will pick up the slack. The German arts community has long cooperated with sponsors, but the contributions from private sources has remained modest, he observes.

Over at the Berlin Philharmonic, Dr. Grünewald cautions arts institutions not to rely too heavily on sponsorship to cover the day-to-day costs of doing business. Surely the Berlin Philharmonic has benefited greatly from the support of Deutsche Bank, whose contributions are used for things like the educational program. "If you have a sponsor, this sponsor should never contribute money to pay the salaries of the personal or cover the costs of running the institution -- it should be used for special projects," says Dr. Grünewald. "If they back out, then you'll have problems and no arts institution should find themselves in this position."

The message: corporate funding is helpful and welcome, but not the end-all answer to the financial crisis. Both public and private funding are nowadays, sadly, increasingly hard to come by.