Eco-friendly Paris: paving the way towards a greener future

The French capital has always been a trendsetter. With eco-friendly initiatives in place, the city is now inching closer to meeting its climate goals. DW's Eesha Kheny shares highlights from her first trip to Paris. 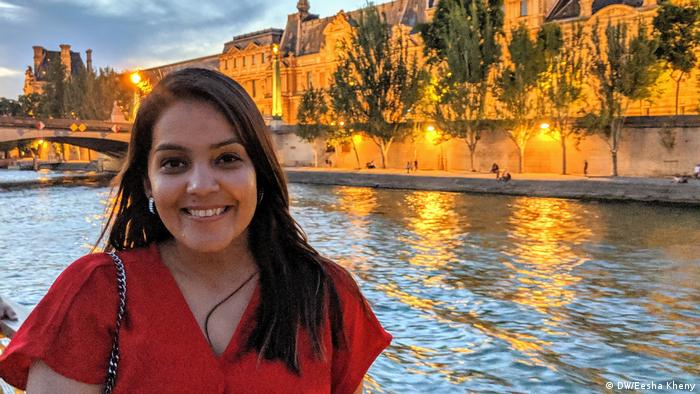 ''One noisette and Nutella crepe for you?'', he asked drawing my attention away from the busy junction. I nodded, smiling at the very 'French' question asked in a heavy French accent. The air smelled of brewed coffee, freshly baked baguettes, and cigarette smoke — a combination that I had come to associate with Parisian streets, people and way of life. For a while, I lingered over my noisette — one shot of espresso with a dash of milk or foam — soaking in the charm of the café which like many others spilled onto the pavements. Despite the extreme late-summer heat and crowds, there was still a pervading sense of tranquility. This was, after all, Paris. 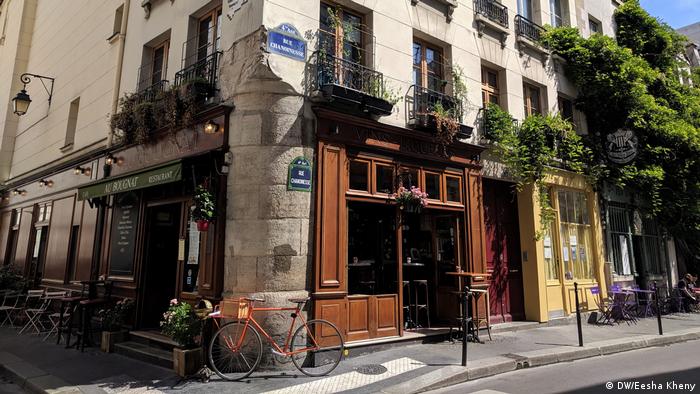 Green elements are a common sight in Paris

I hadn't known what to expect from my first trip to one of the most visited cities in the world. On the one hand, Paris obviously had to be extraordinary enough to attract millions of tourists year after year. But on the other hand, I wasn't sure if this level of hype was justified or if I was setting myself up for a disappointment? As it turned out, Paris surprised me at every turn.

The city is more than a cultural hub overflowing with inspiring art, architecture, fashion, and food. It is also a forerunner in climate initiatives, taking measures for a greener, cleaner and possibly cooler Paris. In 2015, at the United Nations Climate Change Conference (COP21), world leaders discussed climate policies under the Paris Agreement. The determined key goal was to combat climate change by limiting the global temperature increase to below 2 degrees Celsius (3.6 F) by the year 2100. With an emphasis on consensus-building rather than legal enforcement, the agreement came into effect on November 4, 2016, and by the looks of it, the city of Paris was already a step ahead.

Green living in the big city

Unlike other cities where monotonous concrete grew to dominate, green spaces in Paris have been a key element for centuries. Historic public spaces like the Tuileries — Paris' biggest gardens dating back to 1564 — and Royal Palace Garden (or Jardin du Palais Royal as it's called in French) — created in 1633 —  have long also served as established tourist attractions. But the city plans to take things further through an urban initiative that aims to have 100 hectares (247 acres) of green buildings by 2020. 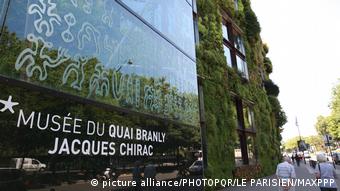 I was skeptical of this goal — wondering if it might be a little over-ambitious — until I saw the work of Patrick Blanc: an innovative French botanist who designs and creates vertical gardens. It looked so good, you'd be forgiven for thinking it might be fake! Running my hand against the wall, I felt the freshness, coolness, and life in the leaves. With 15,000 plants covering an area of 799 square meters (8,600 square feet), the facade of Quai Branly-Jacques Chirac Museum was a clear example of how Paris sees the future. With limited space to work within the city, rooftop and vertical wall gardens should help lower temperatures on hot days, provide insulation in winter, improve air quality and add to visual appeal. Likewise, I noticed that the cafes and restaurants which incorporated green spaces tended to be more crowded than others. Perhaps, popular as interesting photo-ops that also provided a refreshing corner to cool off. Similarly, many busy areas in the city had green enclaves equipped with benches and fountains to enjoy: a welcomed break by tourists. 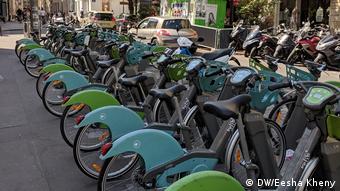 The 'Vélib' Metropole bicycles can be docked at 1,200 stations around Paris

Cycling along the Seine

Apart from focusing on growing 'green', Paris also wants to curb carbon emissions. In an effort to encourage people to be more active, the city has invested heavily in its bike-sharing system 'Vélib' Metropole'. The scheme has been operational since 2007 as 'Vélib', was re-branded in 2018 and currently has approximately 15,000 bicycles throughout Paris. That explained why I saw blue (electrical) and green (mechanical) bicycles everywhere. Although in the past bicycle maintenance and refund of the 150-euro (166 US $) blocked deposit back to the users had been issues, the system claims to have improved since the start of this year. With a day pass costing 5 euros (5.52 US $), the first 30 minutes of every ride is free of charge. It definitely was appealing considering Paris currently has 772 kilometers of cycle paths and more to be developed in the near future. 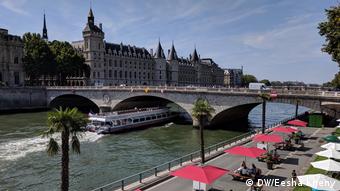 Furthermore, the city has stopped motor traffic from using long stretches of the UNESCO-listed riverbanks of the Seine River — thus, creating tranquil public spaces right in the heart of Paris. While the Left Bank (Rive Gauche) was revamped from a 2.3 kilometer-long expressway (1.42 miles) back in 2013, the Right Bank's (Rive Droite) recreational spaces extending over 3.3 kilometers (2 miles) were set up in 2017. This is exactly where I found myself on a sunny Saturday morning: cycling towards the Eiffel Tower from Place de la Bastille. With the Seine on one side, tanning sunbathers on the other — their white umbrellas creating a beach atmosphere —  and palm trees overhead, my day was already off to a good start. Over 7.7 kilometers (4.8 miles), I passed under the shaded arches of iconic bridges and stopped at tourist attractions by simply docking my bicycle. After touring an attraction I just picked-up another bike from the docking station. 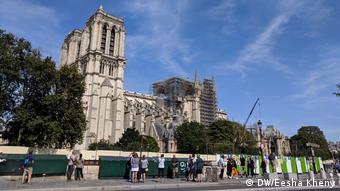 Through my eyes: Notre-Dame, Musée d'Orsay and Eiffel Tower

The first stop on my route without a doubt had to be Notre-Dame. A sense of loss hung in the air as people looked up at the gothic cathedral, talking in whispers and pointing at the damage done by the fire on April 15, 2019. My mind recalled the flaming images and videos on my TV screen as news channels around the world focused on Paris. Now, cranes and scaffolding adorn the structure in a long process of reconstruction that's estimated to last more than 20 years. I tried to fill in the gaps of the skyline by imagining a 91.44-meter (300 feet) tall spire and a missing roof on the south facade, but failed. Maybe I will come back one day to see if my imagination did any justice to the real thing. 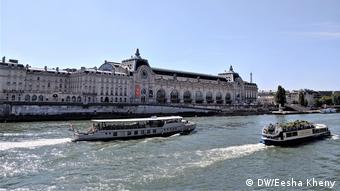 From there, located just 2.5 kilometers (1.55 miles) away — in the former Gare d'Orsay railway station and hotel — is the world-famous Musée d'Orsay. After waiting in a queue for 45 minutes and paying 14 euros (15.5 US $), I entered the museum filled with an excitement comparable to that of a child in a chocolate factory. Awe-struck and wide-eyed, I spent hours poring over original masterpieces by Vincent Van Gogh, Claude Monet, Pierre-Auguste Renoir, Paul Gaugin and Berthe Morisot. It was an overwhelming feeling to be surrounded by works of art that I had admired from afar for years. I was so delighted that I had decided to make the Musée d'Orsay — one of the world's largest collections of impressionist and post-impressionist art — my first museum experience in the city. 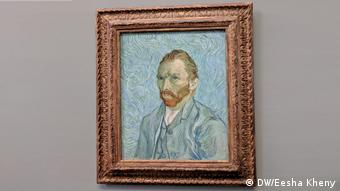 Dating back to 1889, this oil on canvas painting is a self-portrait by Vincent van Gogh

Onward, by now on my third bicycle of the day, I pedaled along the Seine to what I had planned as the grand finale: the Eiffel Tower. As I moved closer, the tower grew ever larger. Constructed in 1889 by Gustave Eiffel for the World's Fair, the iconic tower is celebrating its 130th anniversary this year. Over the years people have loved and hated it, but no one could deny that thousands of tons of wrought-iron stacked to a height of 324 meters (1,063 feet) were anything other than a marvelous engineering and architectural feat. Furthermore, the monument is setting a good example when it comes to sustainability, having been equipped with LED lights, solar panels, and rainwater harvesting techniques and recently — in 2015 — two silent wind turbines were camouflaged into its structure, producing 10,000 kWh of renewable energy annually. I felt minuscule and insignificant standing under this symbolic tower which continues to earn laurels with age. Slowly, the sun set and the Eiffel Tower lit up, shimmering and glittering with 20,000 light bulbs. While I watched, I couldn't help but be amazed with the accomplishments of human creation.