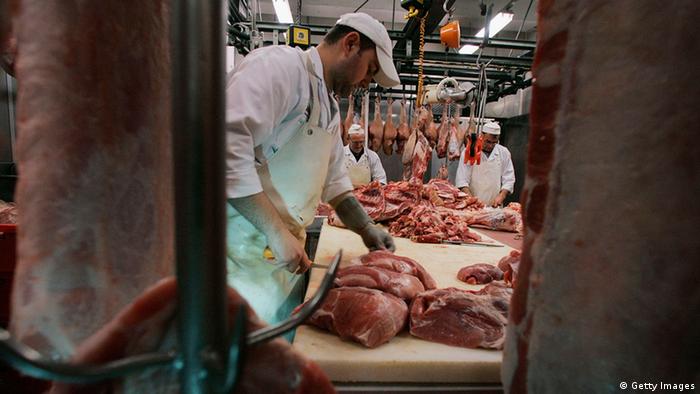 "It is a very hard job and we cannot find many employees willing to work under these conditions," admits Andre Vielstädte, press spokesman for the major meat company Tönnies Lebensmittel GmbH. This is his attempt at explaining why the meat industry, including Tönnies, remains so reliant on subcontractors to provide its staff, many of whom hail from Eastern Europe.

Vielstädte had also offered to arrange a later discussion for DW with some of the Romanian employees working in Tönnies abattoirs, but he had not done so at the time of publication.

Liviu Radion is tired of waiting. Eleven years ago, also in December, he left the small Romanian town of Tulcea, along with a few hundred other men, hoping for a better life in Germany. Romania joined the European Union in January 2007, and won full rights to freedom of movement by 2014. As for Romanians working in Germany, their rights should be the same as any other EU citizen.

Liviu Radion was told he'd been fired while in hospital

They signed employment contracts with Romanian companies and were supposed to get good salaries, insurance, paid holidays and a decent accommodation. They didn't complain about working 10- or 12-hour shifts, six days a week, in cold rooms refrigerated at 5 degrees Celsius (41 Fahrenheit). They didn't question the exorbitant monthly rent of almost €2,000 (around $2,300) they had to pay for the accommodation provided by the company. Some of them say they shared two-bedroom apartments with as many as nine other people. And they didn't manage to protest against paying between €50 and €100 monthly for their working equipment — like their uniforms and cleavers — as they didn't have a chance to learn German.

This was very convenient for the employer. Its staff couldn't really complain during checks by German customs officials. And they had no real voice after seeing their doctors and learning that their health insurance policy did not cover their needs. It was even worse: unemployment benefits were not included either, because the subcontractors kept canceling and changing their contracts. As a result, the workers were not registered as paying regular contributions into Germany's social insurance system. 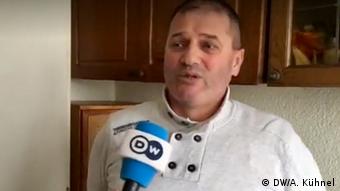 Liviu Radion got sick, then was told while in hospital that he'd got the sack, too

One night, Liviu Radion collapsed, not far away from his place of work. Later, in hospital, he learned that he'd been sacked. He was employed by one of the many subcontractors providing staff to the slaughterhouse in Bochum where he worked. He eventually fought off the disease, and is now fighting against the industry that used to employ him.

According to German trade union estimates, the meat industry employs approximately 20,000 workers from Romania alone. Liviu Radion's horror story is not an isolated one. That's why Germany's umbrella trade union organization, the DGB, started a project for workers from other EU countries in the meat industry. Szabolcs Sepsi coordinates this project, he speaks Romanian and is also an adviser for staff, based in Dortmund. Other advisers in Dortmund, as well as in Kiel, Oldenburg and Berlin have language skills including Bulgarian, Hungarian and Polish.

"We don't have statistics regarding the number of Romanians working in slaughterhouses in Germany, because about 90 percent of the workers — including also those from Poland, Hungary and Bulgaria — are not directly employed," Sepsi told DW. He added that they usually signed with subcontractors. "Many subcontractors have mixed profiles and are not necessarily registered as meat trade companies, but as cleaning or logistics organizations. So, many of those working exclusively in slaughterhouses are actually registered as cleaning staff."

Sepsi told DW that the DGB knew about at least 10 slaughterhouses with 500 to 1,500 Romanian employees: "And there are many more with over 100 workers from Romania. They are also working in the meat industry and on many farms across Germany." 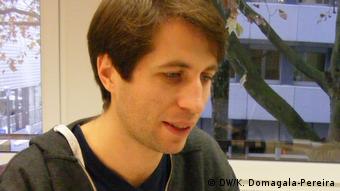 Liviu Radion and his fellow Romanians who are still able to work were surprised to hear that their problems had been discussed by politicians in Berlin recently. According to a new law that was passed in August, the management in the meat industry must take responsibility for its employees, even if they're technically assigned to subcontractors. However, several people working in slaughterhouses, who wanted to remain anonymous, told DW that they had hardly noticed any improvements.

Four months after the new law was passed, it's still nigh on impossible to find a German slaughterhouse where Eastern European staff get a competitive wage, let alone one where they're employed directly by the abattoir's owner.

As for a discussion with staff at Tönnies GmbH, owned by billionaire Clemens Tönnies who's best known as the chairman of Bundesliga football club Schalke, that never materialized.

But Liviu Radion has decided to speak up. His bad experience could serve as a cautionary tale, helping others understand that they also have rights. Radion also wants his colleagues to know that, if they are abused or get into trouble at work, there are advisers on hand at the DGB trade union who can speak their language.