Airbus parent EADS says it is planning a new plant in southern Germany and a new subsidiary grouping several factories together as its restructuring moves ahead. 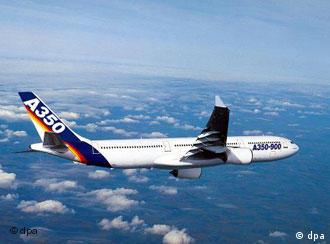 After the failed sale of its three plants in the German cities of Augsburg, Nordenheim and Varel, Airbus parent European Aeronautical Defense and Space NV (EADS) is whipping the sites into shape. According to a company spokesman, some 360 million euros ($518 million) will be invested in the Augsburg and Nordenham plants.

A new 180 million-euro plant will be built in the southern German city of Augsburg. According to the Augsburg plant manager Hans Lonsinger, it will be the most modern of its type, producing fuselages for Airbus A350 long-distance aircraft. Another 180 million euros will be invested in Nordenham, on the North Sea.

Originally EADS wanted to get rid of the plants in order to minimize the A350 development risks. The planned sale fell through at the end of March, however, due to the falling dollar and the turbulence in the international financial market. Despite the failed sale, EADS still wants to form a new subsidiary called Premium Aerotec that will group together the two plants in Augsburg, along with the plants in Nordenham and Varel, said the spokesman.

"We can't just lay our hands in our laps and wait and see what happens," he said.

Premium Aerotec, which will be headquartered in Augsburg, will have around 6,000 employees. It is expected to have a yearly earning potential of 1.3 billion euros. The company will be taken over by Hans Losinger, whose first task will be overseeing the construction of the 63,000 square-meter (678,000 square-foot) factory. One of the main goals of the factory will be changing the material used in the fuselages from aluminum to carbon fiber.

The new factory in Augsburg should be complete by 2011, and the first A350s are expected to be delivered by 2013.

European aircraft maker Airbus announced on Friday it had sold its plant at Laupheim in Germany to German armaments company Diehl and its partner Thales. (02.08.2008)

Airbus Gets Order Boost as Emirates Collects First A380

Emirates, the fast-expanding Gulf airline, announced Monday, July 28 it was ordering another 60 Airbus jets as it picked up its first A380 jumbo jet from the Airbus factory in Hamburg. (28.07.2008)