Germany and France are reported to have struck a deal on a reshuffle of state-owned shares in European aerospace and defense group EADS. Berlin and Paris are likely to hold 12 percent of shares each. 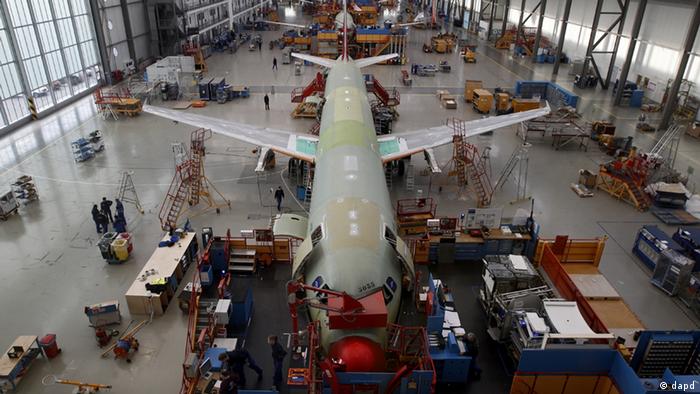 The German state aims to take over 12 percent of the shares of European aerospace and defense giant EADS, the business daily newspaper Handelsblatt reported in its Tuesday edition. This would give Berlin a greater influence on decision making in the parent company of jet producer Airbus.

The newspaper maintained that Germany and France had agreed on a new scheme under which the two nations would in future hold a 12-percent state-owned stake in the company each.

The Handelsblatt said Germany's KfW bank would take over a 7.5-percent share package from carmaker Daimler, with much of the remainder to come from an investor group called Dedalus.

States want to call the shots

For France, the deal would mean a slight loss in direct state influence as Paris would have to reduce its current 15-percent stake. The report said there would be no change in the deal for Spain which would continue to hold 5.5 percent of EADS shares.

The strategically important aerospace company reported a surprising surge in third-quarter earnings and revenues earlier this month, largely due to a strong performance at Airbus. EADS maintained its forecast of a 10-percent increase in revenue for 2012.

The quarterly results were welcomed by CEO Tom Enders after he failed to pull off a mega-merger with British defense contractor BAE Systems. The deal was thwarted by the failure of the German, French and British governments to agree on shareholding terms.