Myanmar's transition from a military dictatorship to a democracy has not been easy. DW Akademie aims to promote the collective responsibility of the government, civil society and media to develop a democratic state. 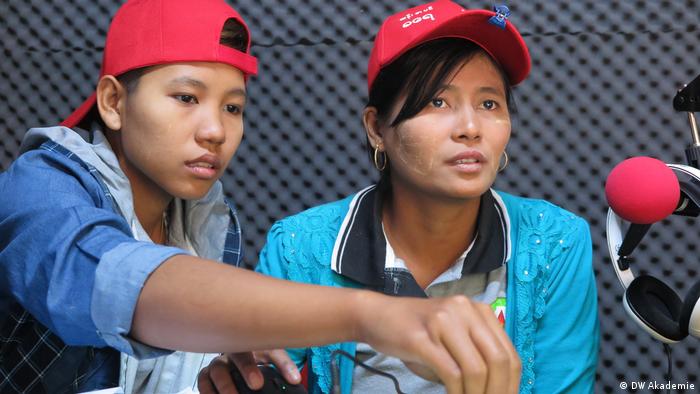 For decades Myanmar was under a military dictatorship but that started changing in 2011 after far-reaching reforms were introduced. The media benefitted from the changes: press censorship was abolished, journalists formed associations, and since 2013, private daily newspapers have been available on the newsstands.

New media laws created the basis for private radio and TV stations, and mobile digital communication and social media are booming. Today, almost 40 percent of the people in Myanmar are registered on Facebook. There, the most popular private daily newspaper has more followers than the New York Times.

Still, many of the hopes tied to the 2015 election victory of the opposition party, National League for Democracy (NLD), and led by Nobel Peace Prize laureate Aung San Suu Kyi, have been dashed. Media reforms have slowed down and press freedoms have deteriorated. The imprisonment of journalists has unsettled the media sector and civil society; it was heightened in 2017 by the seven-year sentencing of two Reuters reporters. It is unclear how the overall disillusion will be reflected in the general elections scheduled for 2020.

(Both reporters were released in May 2019 as part of a larger amnesty.).

DW Akademie has supported the Myanmar Journalism Institute (MJI) since it was established in 2014, and focuses on strengthening digital journalism. The MJI is a national center of excellence for journalism education and training.

DW Akademie also supports the Myanmar Press Council (MPC) as a body that represents the media vis-à-vis politicians and the military, and that settles press disputes. The projects currently focus on how media professionals see their role and their responsibility to the public.

Civil society actors also see the changing use of the media in Myanmar as an opportunity to set topics and participate in social discussions. This makes media and information literacy (MIL) – the critical assessment of information and news – more important than ever for the population, especially in regard to social media. For this, DW Akademie is supporting the Democratic Voice of Burma (DBC) and the Myanmar ICT for Development Organization (MIDO) in producing a television program that focuses on fact-checking and news verification.

Since 2013, DW Akademie has been advising the Myanmar Radio and Television (MRTV) state broadcaster on its reform process. A milestone is a cooperation project between MRTV and ethnic minority media to exchange digital content via a web platform.

The country's first community radio station went on air in February 2018 in the township of Htan Tabin. The station, Khayae FM, is a joint pilot project between DW Akademie and the government. For two hours a day, station volunteers broadcast local news and reports.

A new parliament is to be elected in Myanmar at the end of 2020 - the second* general elections since the country embarked on a road to democracy. DW Akademie is training local media on election reporting. (20.12.2019)