Dresden to Scale Down Bridge to Preserve World Heritage Status

Dresden's mayor said the city aimed to downsize a controversial bridge under construction that, in its original design, could prompt UNESCO to strike the city off its list of world cultural heritage sites. 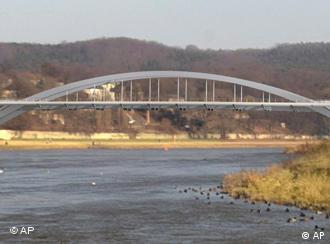 Dresden mayor Lutz Vogel unveiled plans this week to scale down the bridge already under construction to prevent the United Nations Educational, Scientific and Cultural Organization (UNESCO) from taking his city of it list of World Heritage Cultural sites.

The mayor said the plans for the bridge have been revised by Eberhard Burger, the building director who oversaw the reconstruction of the Dresden's Frauenkirche, which was destroyed in World War II during Allied bombing of the city. 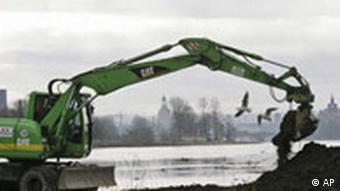 While changes in the original design are possible, "those expecting a miracle, however, will be disappointed," Burger added.

Vogel said that, for its part, UNESCO was not interested in being actively involved in the process of redesigning the bridge.

Vogel said the bridge's width would be reduced by one meter (3.3 feet) to 23.4 meters over the Elbe River.

The bridge's pillars, which rest on the river banks, will also be reduced by a meter -- or 60 percent -- in size by omitting stairs for pedestrians that were part of the original plans. Other features are also supposed to be altered.

Construction of the four-lane bridge began in November last year amid controversy and protests, particularly by nature conservationists that it would endanger rare horseshoe bats that inhabit the area.

Dresden is famous for its striking skyline

While many residents of the city have favored the project because they believe it will ease traffic congestion, others have expressed their concern that the city will lose its World Cultural Heritage Site status -- which has been a major draw for thousands of tourists each year.

UNESCO threatened to take Dresden off the heritage site list because its committee said the character of the city, dubbed as the "Florence of the Elbe," would be compromised. Last June, it also placed the Elbe Valley -- dotted with gardens and palaces -- on a list of "endangered sites" that are under risk of losing their status.

As protesters were dragged away from the site of a controversial bridge on Saturday, Dec. 8, the German government has threatened to claw back subsidies for the project near Dresden that has been opposed by UNESCO. (08.12.2007)

A court ruled Wednesday, Nov. 14, that Dresden could continue with plans to build a divisive bridge across the Elbe River, despite a threat to revoke the city's World Heritage status and concerns for a species of bat. (14.11.2007)

A Dresden court prevented work from starting on a new bridge that could have endangered that city's World Heritage status -- thanks to a bat. (09.08.2007)

What do think about Dresden's plans to redesign the bridge? Please include your name and country in your reply.

It's only the third place to be removed from the UN's prestigious list. Liverpool officials don't agree that new buildings ruin its docklands' historical value.