Dramatic increase in radiation found at German nuclear waste depot | Germany | News and in-depth reporting from Berlin and beyond | DW | 14.04.2011

Increased levels of radiation have been found in the controversial Asse nuclear waste depot in the German state of Lower Saxony. The discovery has led to new calls for the depot to be emptied and closed. 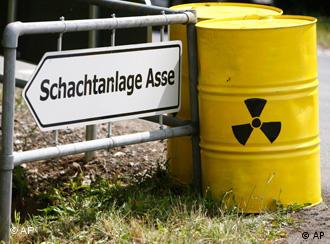 The former salt mine holds some 127,000 waste containers

German nuclear safety officials have found increased levels of radioactivity in a borehole at the Asse atomic waste depot in the northwestern state of Lower Saxony.

A spokesman from the Federal Office for Radiation Protection (BfS) said its measurement of the radioactive substance cesium were 24 times over the allowed limit - the highest level recorded since nuclear waste stopped being stored in the depot in 1978.

The BfS measured a concentration of the radioactive substance cesium of 240,000 becquerels per liter. The measurement was taken 750 metres below ground level.

The spokesman added that the BfS had made sure that no one came in direct contact with the contaminated salt solution and that no radioactivity could seep outside. He said the reason for the raised level was unknown. 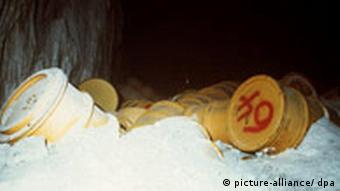 In the wake of the discovery, there have been renewed calls for the containers stored in the depot to be retrieved. The Green parliamentary spokeswoman on nuclear policy, Sylvia Kotting-Uhl, said time was running short and described the depot as a "ticking time-bomb."

SPD parliamentarian Ute Vogt asked for comprehensive clarification by the German government. Vogt said that the coalition had to make it clear that it was not shirking the question of the final disposal of atomic waste in its alleged new direction on energy policy.

The former salt mine holds some 127,000 containers with low and medium-grade radioactive waste, placed there from 1967 to 1978. Plans are under way to retrieve the containers, but experts first need to ascertain their condition.

The Lower Saxony government has said those living near a dilapidated nuclear waste storage facility have higher rates of cancer. Men have twice the rate of leukemia and women have three times the rate of thyroid cancer. (26.11.2010)

Government admits to mistakes in dealing with nuclear waste dump

The German government has admitted to mistakes in its handling of the controversial derelict nuclear waste dump in Asse. It also called on energy companies to share the cost of shutting it down. (14.01.2010)