Donald Duck and the art of cartoon translation

In other parts of the world, Donald Duck is known as Paja Patak, Paperino or Aku Ankka. As the Disney character turns 85, DW spoke to comic book translator Wolfgang J. Fuchs about the art of translating cartoons.

Donald Duck's career started 85 years ago in 1934, as a supporting actor in a seven-minute animated film. Shortly after his first appearance on TV, he became one of the most successful stars in the Disney family.

Easily recognizable with his trademark outfit — a sailor's shirt and cap, along with a red bow tie, but no trousers — the clumsy duck is renowned for his fiery temper. If he's a bit of a loser, he never gives up and is devoted to his sweetheart, Daisy Duck, all while dealing with his mischievous nephews, Huey, Dewey and Louis Duck. His imperfections have certainly contributed to his popularity. He now even has his own star on Hollywood's Walk of Fame.

The iconic cartoon character is known by different names in other languages, including Pasko Patak in Croatian, Aku Ankka in Finnish, Anders And in Danish or Paperino in Italian. Who comes up with them and how are comic strips adapted into other languages?

DW talked to Wolfgang J. Fuchs, who has been translating comic books since 1965, including Donald Duck and Prince Valiant magazines. He is also one of the first comic book experts in Germany.

DW: Some parents see cartoons as a waste of time and want their children to read "real books" instead. How did yours feel about comic books?

Wolfgang J. Fuchs: My parents didn't have anything against cartoons; I read my brother's magazines. However, I also attended a boarding school for a couple of years and we weren't allowed to read any comics at all there. Later, in high school, I noticed that it was much easier to learn English with comic book dialogues. And this is how my passion for cartoons developed.

You've turned your passion into your profession: You're one of the first comic book researchers in Germany and a translator of comic books and novels since 1965. What is harder to translate? 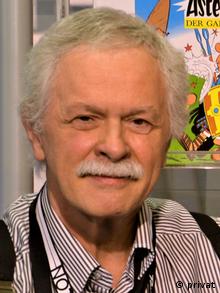 In both cases you have to convey the text in the same way as the original without changing it too much. But there is rarely the possibility of translating them one-to-one.

The difference between a novel and a comic is that in a novel you have to pay attention to the language, but you can work with a longer chain of words. In general a novel ends up being 10 to 15 percent longer in its German translation. Whereas in comic strips, the text must be exactly as long as given, because the speech bubbles cannot be changed. Translators used to get a template for each bubble where the lines were drawn in. For example, the first could only contain a maximum of 15 letters, the second 20, the third 20 and the last, nine. So I would calculate how much I was actually allowed to write.

Huey, Dewey and Louie are called Tick, Trick and Track in German. Why aren't characters' names kept in translations?

In the past, characters' names used to be translated to better reflect a country's culture. Nowadays, names are often kept for merchandising purposes.

For example, Spider-Man was initially translated with the German word for spider, "Spinne." As the first animated films came out in Germany, Spider-Man magazines were then titled "Die Spinne genannt Spiderman" (The spider called Spider-Man). Meanwhile, it's simply Spider-Man, which makes it easier for marketing.

But Uncle Scrooge will always be called Onkel Dagobert in German. The name was so well chosen [by first Donald Duck translator, Erika Fuchs] that Dagobert was also used in other countries, such as the Netherlands. 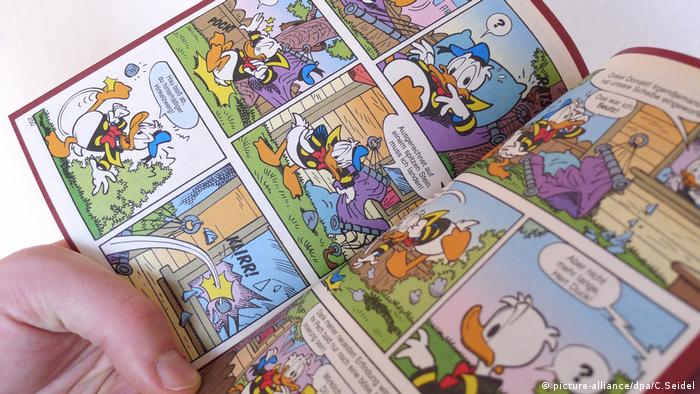 In Germany, the comic booklets known as "Lustiges Taschenbuch" are more popular than the animated cartoons

How are the new comic strips written? Who decides on the stories?

US publishers do not produce any new material anymore, apart the DuckTales. The comics published in Germany by Egmont are produced in Denmark. Each year, 100,000 pages are written by Danish, English, US and Italian authors; they are then drawn by cartoonists from Italy, Argentina, Brazil, England, Denmark, Finland and the Netherlands. Each country can choose to publish titles from this pool of booklets.

Donald Duck and Mickey Mouse never meet in the English version of the strips, but in the German ones they live in the same city. Why is that the case?

That's actually not quite the case, because in the animated cartoons, Donald Duck and Mickey Mouse met and interacted often. But it's true that they had nothing to do with each other in the magazines for many years.

This was because of mail legislation in the US. Comic books could only qualify for a reduced mail rate if they fulfilled certain criteria. For instance, there had to be more than one story in the booklet and the second story had to feature other characters than in the first one. If the same figures appeared in the second story, then the booklets could not be sent with the second-class mail rates, which is why Mickey Mouse and Donald Duck had to appear in separate stories.

Donald Duck is now celebrating his 85th birthday. Will he ever learn from his mistakes?

I don't think so, because if he did, he wouldn't be Donald Duck. Then you would have to completely rework the concept and nobody wants this. The stories wouldn't be so funny if he wasn't such a clumsy fellow.

And in fact, not everyone agrees on his date of birth. Some say that Donald Duck was born in March, on a Friday the 13th. Others say it would be June 9, 1934 — the day he first appeared in a cartoon. Before June 9 of that year, there were two March Fridays that fell on a 13th: One was three years earlier, in 1931; the other one 20 years previously. That would fit into the story that Donald Duck was a stand-up comedian before he was signed by Disney. That would however mean that as a real character today, he would actually be 105 years old.

Even 75 years after its original release, the Disney cartoon "Bambi" continues to move children and adult audiences alike. Based on an Austrian novel, the film's environmental messages have had a lasting influence. (08.08.2017)

Minnie Mouse gets a star on the Walk of Fame

Following in the footsteps of Mickey Mouse, Bugs Bunny and Donald Duck, Minnie is awarded her own star on Hollywood's famous boulevard after 90 years in show business. DW explains how Walk of Fame stars are awarded. (22.01.2018)