DW has filed a lawsuit in a civil court in Ankara for the return of video footage of an interview with the Turkish Minister for Youth and Sports. The material was confiscated and all appeals for its return have failed. 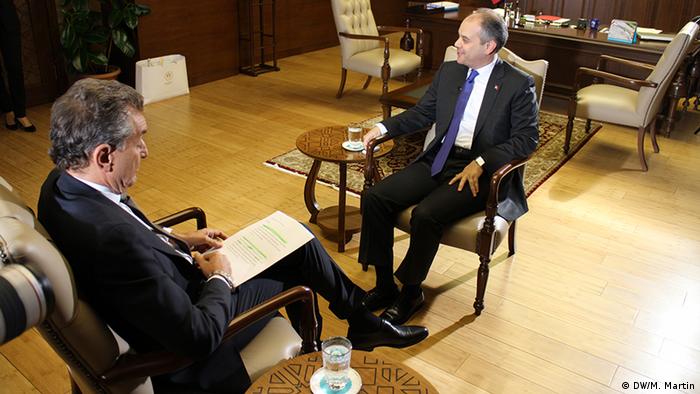 On September 5, DW TV host Michel Friedman interviewed Turkish Youth and Sports Minister Akif Cagatay Kilic for DW's "Conflict Zone." Their exchange touched on the fallout from July's coup attempt, as well as press freedom and the status of women.

Following the recording a Turkish government spokesperson instructed DW not to air the interview; when Friedman protested, the video was confiscated by ministry staff.

All attempts by Deutsche Welle to get Turkish authorities to return the footage were ignored, so the German international broadcaster on Monday filed a lawsuit at a court in Ankara.

"This is an event that has nothing to do with rule of law and democracy. We are now using legal methods to demand the prompt return of our video material," said Deutsche Welle's Director General, Peter Limbourg.

"We advocate unrestricted press freedom. Turkey is closely connected to Europe. Along with that comes respect for democratic fundamental principles," said Board Chairman Dr. Karl Jüsten. "It is deeply troubling that Deutsche Welle has been forced to file suit in court for the return of the video interview with the Turkish minister.”

The Board requested that DW receive additional funding to adequately fulfill its responsibility as the provider of objective information in this politically significant region.

"We cannot accept what is happening in Turkey with regards to press freedom. DW is required to inform people in a comprehensive and objective way and to convey Germany's positions," Jüsten said.

Its interviewees do not receive questions in advance, but topics for discussion are often cleared beforehand. In this case, they were cleared by the minister's press people.

Turkey ranks 161 out of 180 countries in the Reporters Without Borders Press Freedom Index.

The relationship between Turkey and Germany has been strained following this summer's Bundestag resolution to recognize the Ottoman slaughter of Armenians as genocide, as well as developments in Ankara since July's coup.

The Berlin government has backed Deutsche Welle in its protest against the seizure of the material. But the tape incident further adds to strains in ties between Germany and Turkey at a time when Chancellor Angela Merkel needs Ankara's help in managing Europe's migrant crisis.

Deutsche Welle has filed a claim in a civil court in Ankara for the return of video material containing an interview with a Turkish minister. (26.09.2016)

German diplomats have spoken out after Turkey's Youth and Sports Ministry confiscated a DW interview. Media and Culture Commissioner Monika Grütters has also made a strong public statement. (07.09.2016)

Turkish authorities have confiscated DW Video material of a 'Conflict Zone' interview with the Minister for Sports and Youth Affairs. The interviewer, Michel Friedmann, had touched on the aftermath of the failed coup. (06.09.2016)

Turkey's media watchdog has blocked access to DW's websites after demanding it apply for a license. The German public broadcaster says it plans to take legal action against the move.

No freedom for victims of sexual violence in conflict 16.06.2022

Sexual violence is present wherever conflict erupts, according to the UN. Adolescent girls are particularly at risk. Survivors trudge on, though, amid a shocking increase in sexual crimes committed as weapons of war.

Turkey's media watchdog has started a countdown for DW to apply for a broadcast license or see its TV channels and website banned in the country. DW's director general called the move an attempt at "censorship."