Deutsche Telekom head Rene Obermann said the firm would take tough action if it was confirmed that employees breached privacy laws by monitoring phone calls between the top company officials and journalists. 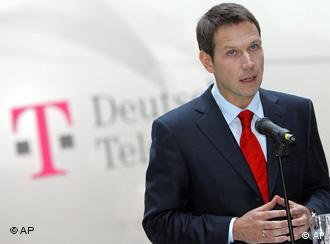 The allegations come as relations with labor leaders are rocky

"There are going to be harsh consequences" if allegations that Deutsche Telekom spied on company officials and journalists by monitoring phone traffic between them in order to uncover the source of information leaks are true, said CEO Rene Obermann in a statement published in the German mass circulation Bild Zeitung on Monday, May 26.

"This is a breach of our data privacy laws. Cases of misconduct must be clarified," said Obermann, who assured Telekom customers that their phone records would remain confidential.

"The billing records of our millions of fixed-line and mobile customers remain secure," he said, adding that he has faith in Telekom's 240,000 employees.

The alleged misconduct took place over the course of more than a year in 2005-2006 under Obermann's predecessor Kai-Uwe Ricke, who was ousted at a time of diminishing profits and management disputes.

Ricke and Klaus Zumwinkel, who was head of the telecom giant's supervisory board at the time, both denied commissioning the analysis of the data, which recorded the numbers dialed and the time and the duration of phone calls. Obermann was head of the mobile division of Deutsche Telekom at the time.

Hundreds of thousands of phone calls made by top management and supervisory board members were monitored, but not tapped, according to newsmagazine "Der Spiegel." A private Berlin agency has been analyzing the data.

The criminal inquiry, which has been handed over to public prosecutors, threatens to undermine relations with labor leaders at a point when management has been making massive job cuts in restructuring its domestic operations.

Max Stadler a parliamentarian and internal affairs spokesman for the opposition FDP, told the Frankfurter Rundschau newspaper it was "earth-shattering that a company that has a special responsibility for protecting private data" violated Germany's data privacy laws.

Security staff at telecoms giant Deutsche Telekom are suspected of breaching German data privacy laws during a secret attempt to identify the sources of high-level leaks to the media, the company said Saturday, May 24. (24.05.2008)

Deutsche Telekom is the dock from Monday in a landmark lawsuit filed by 16,000 shareholders who feel cheated by the former public phone company and are suing the telecoms giant for up to 80 million euros ($126 million). (07.04.2008)

Rene Obermann, CEO of Deutsche Telekom, told DW that innovation is a key part of the firm's growth strategy. He sees the company as becoming one of Europe's top three providers within the decade. (31.01.2008)