Democrat Bill de Blasio has won the New York City mayoral race, according to exit polls. He will succeed billionaire Michael Bloomberg, who has governed the city for twelve years. 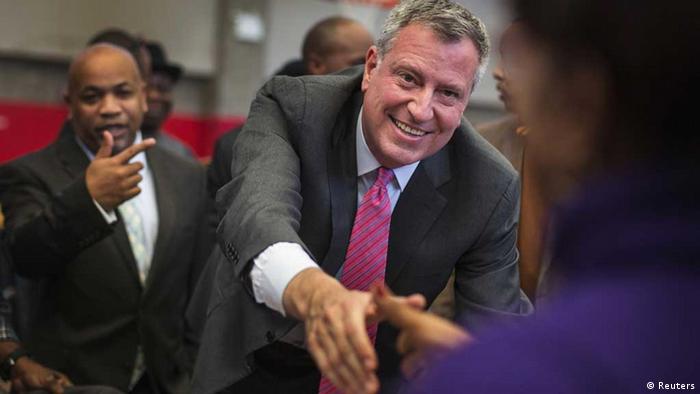 "Thank you, New York City," de Blasio's campaign tweeted just after the close of polls. Tuesday's outcome was virtually a foregone conclusion, with de Blasio enjoying a 41-percent lead over his opponent in the run-up to the election.

New York is set to vote for a new mayor on November 5. But the person to get the job will have a slew of problems to solve. What direction is New York headed? Will it be a city for the rich, or a city for all? (04.11.2013)

Although New York City has six times as many registered Democrats as Republicans, the metropolis has been governed by conservatives since 1989. Former Mayor Rudolph Giuliani helped clean up a city plagued by crime and saw it through the September 11, 2001 terrorist attack against the World Trade Center.

Departing Mayor Bloomberg, who ran as a Republican and later as an independent, implemented controversial safety and public health policies. He introduced the so-called “stop-and-frisk” policy, in which police can stop, question and frisk people using a lax definition of probable cause.

There were two other closely followed regional elections in the US on Tuesday. In New Jersey, incumbent Republican Governor Chris Christie won a landside victory in the overwhelmingly Democratic state. Christie is tipped as a possible 2016 Republican presidential candidate.