′Democracy means governance through the people′ | World| Breaking news and perspectives from around the globe | DW | 30.09.2011

'Democracy means governance through the people'

Michael Efler is the spokesperson for 'Mehr Demokratie,' an initiative calling for more referenda and a better electoral law on the German and European level. He also says Western systems can learn from the Arab World. 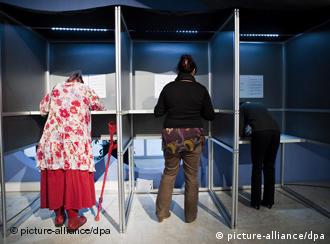 Democracy is about more than just voting

"Mehr Demokratie" was founded in 1988. Today, the initiative has 13 regional branches, eight offices and close to 6,000 members. "Mehr Demokratie" is the largest non-party organization promoting democracy in the European Union. Michael Efler has been their spokesperson for two years.

Deutsche Welle: What are the biggest challenges for our modern democracy here in Germany?

Michael Efler: People have massively lost trust in our parliamentarian democracy over the past 20 years. They haven't lost faith in the state form of democracy itself, rather in how it's done. We are committed democrats in both Eastern and Western Europe, but people are irritated that politicians make decisions without taking into account the population's opinion a lot of the time.

We need to regain this trust. But that's only possible if you take citizens seriously. We need to create instruments of direct democratic participation - like referenda and a better electoral law - on the federal and on the European level. That's the core challenge, amongst others, such as transparency.

What is your definition of democracy?

Democracy means governance through the people, and this is to be taken quite literally. It doesn't mean that the people have to decide on everything. Our representative institutions are there for a reason, and we're interested in keeping them. But they need to be complemented by participatory and direct democracy. Germany's Basic Law stipulates in Article 20 that all power comes from the people. But how can a system be justified which reduces the people to voting their representatives for the Bundestag? That's not enough. 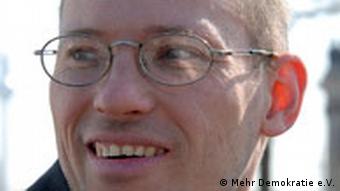 When the German Bundestag, the Parliament, passed the extension of the European Bail Out Fund on Thursday, for instance, the politicians decided about billions of euros in taxpayers' money. This decision has unpredictable consequences. I'm not sure that our representatives have sufficient legitimization to make this kind of decision. The public happens to have a very different opinion in this matter. Too often, people in power will just base their decision on their own interests and ignore the citizens' opinion.

Which challenges and which opportunities does the Internet provide?

Let's start with the opportunities. Everybody knows that the Internet played a crucial role in the uprisings in North Africa. If we look at how we can make use of the Internet here in Germany, it can for instance play a role in collecting signatures for petitions. Interestingly, it hasn't been integrated into legal procedures anywhere in the world. But I believe that's something to tackle.

The European Citizens Initiative, which comes into effect in April 2012, gives voters the possibility to sign online - that's a first in a participatory democratic instrument. The Internet is also a valuable source of information, of course.

But there are a number of challenges, too. We don't have Internet access everywhere yet. And of course security standards must be guaranteed 100 percent. Citizens must be sure to know that their vote has been counted, and that it has been counted correctly and that no hacker has interfered.

Coming back to the Arab uprisings - what can Western democracies learn from this process?

In general, Western democracies can learn and must learn from other regions. We shouldn't think that we're the crème de la crème of democratic progress and that we have to teach others and not listen. There are of course totally different conditions in the Arab World still. It's a region with traditionally autocratic and dictatorial forms of governing, election fraud happens all the time. Democracies are only slowly emerging.

The army and the police play a big role, human rights are being violated in many places. That's of course something which the people were bound to rebel against, in countries like Libya or Egypt. There's also still a lot of social injustice.

And that interestingly also exists in Europe, and it has led to the protests in Spain and Greece. So it's a difficult comparison, but it's important that we don't just focus on democratization, but also on establishing social balance. And that's clearly something we also need to work on here in Europe.

Europe would like to see democratic conditions introduced into the Arab world, and is helping with artificial state-building. But for countries in transition, the measures often don't sufficiently take effect. (15.09.2011)