Democracy advocates cheer referendums, no matter what the outcome | Germany | News and in-depth reporting from Berlin and beyond | DW | 19.07.2010

Democracy advocates cheer referendums, no matter what the outcome

With two high-profile referendums making headlines in Germany recently, direct democracy advocates are cheering. But there is still room for improvement, epecially in terms of federal policy. 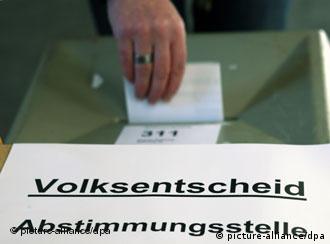 Nearly 500,000 people exercised their right to vote in the Hamburg referendum

In a referendum in the city-state of Hamburg at the weekend, the state government's proposed education reforms were rejected. The "nay" vote was at least partly responsible for the resignation of Mayor Ole von Beust. The Hamburg poll came just weeks after a headline-making referendum in Bavaria, in which a 61 percent majority voted in favor of a strict public smoking ban.

Partly because of its troubled political history, Germany has no mechanism for putting laws and policies to a direct vote on the federal level. But when it comes to issues that are decided at the state level - such as education or smoking regulations - the public can have a say.

Michael Efler is a spokesman for More Democracy (Mehr Demokratie), a group that works to promote direct democracy at both state and local levels. He believes direct public initiatives should exist at the federal level as well. 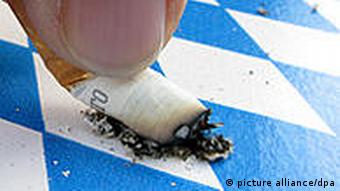 Bavaria voted in favor of strict regulation on smokers

This is because parliaments around the world "lose touch with society," and decide in favor of things that the majority of the people are opposed to. "That is also true on the national level in Germany today," Efler said.

A question of German history

But Gerd Langguth, a political scientist at the University of Bonn, is opposed to initiating nation-wide plebiscites. Germany's Basic Law, as the constitution is called, lays down a strong role for parliamentarian representatives, "which is better than adopting new instruments at the federal level," he asserts.

"Due to our history, the founding fathers of the Federal Republic were in favor of a strong democracy. They referred to 'militant' democracy. They had a fear that the plebiscite could be misused by people - and they knew all about the possibilities of misleading people. Now we've had the constitution for 60 years, and I think we should keep it the way it is," he said.

In a modern democracy, "you need compromise in many questions. A clear 'yes' or 'no' is not always the best answer," Langguth added.

Meanwhile, the barriers to direct democracy are so high in most of Germany that only six of the country's 16 states have gotten around to holding referendums. Bavaria and Hamburg have each held six so far, making them the states most likely to put policy decisions directly to their citizens.

The likelihood of whether or not a state will hold a referendum comes down to legal developments, Efler explained. For example, his advocacy group worked to lower the hurdles to putting an intitative on the ballot in Hamburg - and that recently paid off. 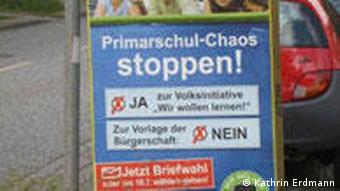 Hamburg took the school-reform question straight to the public

"It used to be that 10 percent of eligible voters needed to sign a petition in order to put a referendum on the ballot, and now it is just 5 percent," he explained. "Also, we reduced the threshold needed to win from 25 percent of eligible voters, to just 20 percent of the population. That doesn't sound like much, but the last referendum, opposing education reform, passed by just 21 or 22 percent. For an initiative, that can be a matter of life and death."

It is exactly those lower hurdles that bother Langguth, however.

"Referendums have a participation of less than 40 percent in Germany, which means that a minority of the voters are making a decision for everyone. And that is a problem," he said.

In contrast, "parliamentarians are elected to make decisions in the common good," Langguth said. "And if people aren't happy with their decisions, they can be voted out of office.

Thomas Rudek is the spokesman for Berliner Wassertisch, a group that aims to create an initiative to force Berlin's water company to publicize the terms of contracts they signed in public-private partnerships with French and German companies.

Collecting signatures is part of the process

Three weeks ago the group started collecting signatures for a petition to allow voters to decide whether or not to make the secret contracts public. They need to gather around 173,000 signatures by October 27 for the measure to make it on to ballots.

"Then, all Berliners would be able to vote in favor of knowing, or not knowing, what is in these contracts," Rudek said. "We want to be able to control what these companies are doing."

Why can't Berlin's parliament simply vote to make the contracts public? Rudek explains that they just wouldn't do it without a referendum: "The contracts were signed off on by Parliament in the first place … the government doesn't want to show its hand to the public," he said.

"We have a big problem in Germany - more and more people are tired of politics," Rudek said. "They don't vote anymore. They think politicians are corrupt and can be bought off. We're simply in favor of more transparency - especially when it comes to public services like water and trash delivery."

Referendums bring politics directly to the people, and they feel more involved, he added. 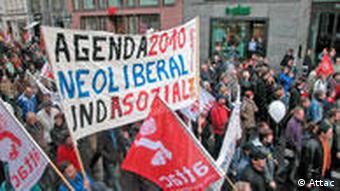 Groups like attac are also lobbyists of a sort

Political scientist Langguth rejects the notion that referendums are a way around lobbyists - because when it comes to politics, lobbies are part of the picture.

"Groups like attac and Amnesty International are also lobbying groups. Unions are interest groups, and so are churches. We have a plurality of lobbying groups… Of course it is important that the influence of lobbyists must be clear and be shown, but influence is normal. Every group is taking influence," he said.

More Democracy's Efler argues that the results of the two most recent referendums in Germany show that no one political side, or party, is at an advantage.

"In Bavaria, you see that the Greens and environmental groups were behind the referendum. In Hamburg it was a conservative victory," he said. "It shows that it depends on the issue and the circumstances - but that direct democracy is a tool for all the people, not just for one part of society."

Hamburg voters blocked proposals to extend primary school education. The reform, intended to give more students access to higher education, was pushed by the city state's ruling coalition - which is now in big trouble. (19.07.2010)

Voters in the southern German state of Bavaria on Sunday voted for Germany's strongest smoking ban, meaning lighting up in bars, restaurants and beer tents at Munich's famous Oktoberfest will be "verboten." (04.07.2010)