Demjanjuk trial postponed because of fever | Germany | News and in-depth reporting from Berlin and beyond | DW | 02.12.2009

The murder trial of suspected concentration camp guard John Demjanjuk was interrupted on its third day because of a new illness contracted by the 89-year-old accused. Demjanjuk has come down with a fever. 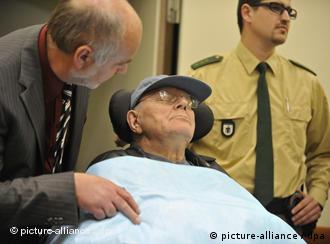 Judge Ralph Alt adjourned the court on Wednesday until Dec. 21, after revealing that the suspect, John Demjanjuk, was suffering from a high temperature and symptoms of an undetermined infection.

Demjanjuk, who suffers from a chronic bone disease, followed the first two days of the trial from a wheelchair and a stretcher, and spent much of the proceedings groaning and being administered with painkillers. Court doctors advised against transporting him to the court in Munich on Wednesday.

Demjanjuk has been declared fit for a trial under restricted conditions, and prosecution lawyers have accused him of play-acting to avoid justice.

The Ukrainian-born Demjanjuk is on trial for helping to murder around 27,900 people at the Nazi concentration in Sobibor, Poland in 1943. The more than 30 plaintiffs in the trial, some of whose testimonies were to be heard on Wednesday, are mainly relatives of those murdered at Sobibor. Judge Alt said a new date would be set for their testimonies.

On Tuesday, lead defense attorney Ulrich Busch said proceedings should be abandoned because Demjanjuk had been acquitted of similar charges made in Israel between 1986 and 1993. He argued that "double jeopardy," a second trial based on the same facts, was illegal in Germany.

Thomas Blatt, 82, who survived Sobibor and who is due to testify in January, said on Tuesday, "I don't want revenge against Demjanjuk, I just want him to tell the truth. If it were up to me I wouldn't even put him in jail. I don't feel hate for him. There is no price he could pay for what he has done."

The second day of the trial of the accused Nazi guard is set to begin with Demjanjuk hearing the formal charges against him as well as testimony from survivors and relatives of victims of the Holocaust. (01.12.2009)

John Demjanjuk's trial is suspended after he falls ill