A Delhi court has sentenced the four men to death in the rape and murder of a 23-year-old woman. The case shocked India and prompted public outcry over the high rate of violence against women. 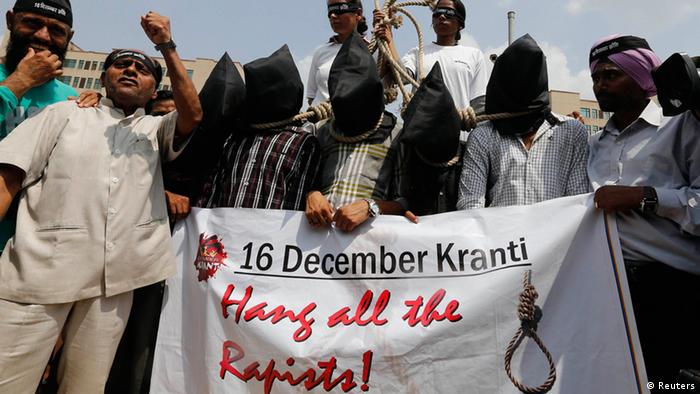 Judge Yogesh Khanna on Friday sentenced the four men to be hanged for their brutal rape of a medical student. India's high court must now approve the sentencing.

Defense lawyers had requested a lighter sentence, but the judge rejected their pleas in light of the "cold-blooded murder" of a "helpless victim."

"These are times when crimes against women are on the rise and strong deterrent punishment requires to be given to perpetrators of these crimes, " Khanna said as he read out the sentence in court on Friday. "There cannot be any tolerance."

Reactions from the defendants and the victim's family were not immediately available.

The fast-track court convicted the men on Tuesday for murder and rape, as well as "unnatural offenses, destruction of evidence…and for committing the murder of the helpless victim."

Hanging in the 'rarest of rare' cases

The Indian judicial system allows for capital punishment only in "the rarest of the rare cases." An unofficial moratorium on the death penalty, which had been in place for nearly a decade, came to an end last year. In November, the sole surviving gunman from the 2008 Mumbai attacks, Mohammed Ajmal Kasab, was hanged. Roughly three months later, Mohammed Afzal Guru, convicted in the 2001 deadly attack on India's parliament, was also executed.

Four adult suspects on trial over a fatal gang rape last year in New Delhi have been found guilty on all counts, and may now face the death penalty. The verdict is regarded as a possible deterrent for potential rapists. (10.09.2013)

In December, the gang lured a young woman and her male friend onto a bus under false pretenses. The two companions were on their way home from a local movie theater. Once the bus was in motion, the men raped the woman, meanwhile beating her friend. The assailants later dumped the two on the side of the road, naked.

The 23-year-old female student was flown to a Singapore hospital and died from her injuries two weeks later.

Authorities arrested the six men connected to the attack in the days that followed. Last month, a juvenile court found one of the men, who had been a minor at the time of the gang rape, guilty of murder and rape. He was given the maximum sentence for a juvenile of three years' detention. The sixth defendant was found hanging in his prison cell in march. All of the defendants had pleaded not guilty to the charges.

Over 100 witnesses - 85 for the prosecution alone - provided testimony during the trial. Prosecutors also admitted DNA evidence and testimony from both victims.

The brutal attack prompted mass protests in India and led to the implementation of harsher punishment for convicted rapists.